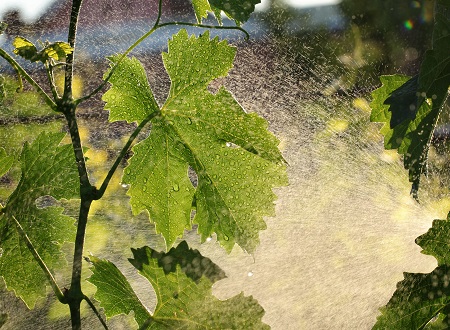 As certain chemicals such as mancozeb and glyphosate are being phased out internationally, South African wine grape producers are considering alternative ways to control fungal diseases and weeds in the vineyard. Experts recently discussed some of these new options during a Winetech Vineyard Forum meeting.

Although mancozeb can still be used as an active agent in fungicides in South Africa, it has been banned in wine producing countries in the European Union (EU) from 4 January 2021, and wines were scanned for maximum residue levels (MRLs) from the 2021 harvest onward.

“As the EU is a major export market for South African wines, it is important for wine grape producers to note that the wines their grapes are destined for do not contain this substance,” says Petrie de Kock of BASF. “The rules may also extend to other export markets in the future.”

Also read a previous notice about the phasing out Mancozeb.

“From a risk point of view and while maintaining this very important EU export market, it is our recommendation that any wines from the 2021 harvest, as well as wines and/or sparkling wines that may only appear on the market later, should not contain any traces of mancozeb, ”says Conrad Schutte of Vinpro’s viticulture consultation service. “However, if a producer wanted to take a calculated risk, it must be done in close collaboration with, and on the recommendation of a specialist in the field of crop protection and chemicals.”

Copper-containing formulations such as hydroxides, oxychlorides or sulphates in products can be used in lieu of mancozeb as an active agent in contact applications on vineyards. Furthermore, formulations of folpet, dithianone, ascorbic acid or Trichoderma asperellum are also available as contact agents. Systemic agents that don’t contain mancozeb in their formulation are permissible and include, among others, ammonium phosphite, fosetyl-Al, potassium phosphite, cymoxanil, dimethomorph and zoxamide.

According to South Africa’s Integrated Production of Wine Scheme (IPW), fungicides for the control of downy mildew can be applied from 10 cm shoot length, taking into account withholding periods.

“It is important to apply contact agents throughout the vineyard’s growth phases,” says Petrie. “It is also suggested that systemic agents be used before and during flowering, especially when favourable weather conditions for the development of downy mildew (moderate temperatures and humid weather) are predicted.”

It is also important for producers to apply anti-resistance strategies to limit the build-up of resistance to systemic fungicides. “Adhere to restrictions in terms of the number of applications per season and vary the systemic agents from different chemical groups,” says Petrie. He suggests that wine grape growers apply contact agents in 5 to 7 day intervals in the period before flowering, or systemic agents in 10 to 14 day intervals. After flowering, contact agents can be used preventively, before an infection period, and systemic agents must be administered within 5 days after an infection period, to allow for healing.

“The variety of tools we have available to control weeds are decreasing fast,” says Hannes Schoeman of Bancella. “Due to restrictions and the ban on chemicals such as glyphosate – the active ingredient in the well-known herbicide Roundup – in certain countries, there is also now a global shortage, which pushes up its price.”

According to Baum Hedlund Law, several countries around the world have already taken steps to restrict or ban the use of glyphosate due to the possibility that it could lead to cancer and other health problems.

Although it is not illegal to use this chemical in South Africa, its use is restricted to a certain extent in export countries such as Canada, Denmark, Sweden and the UK – a trend that could potentially have an effect on the wine industry in the future.

Chemicals that are still permissible include the FOP and DIM herbicide groups, synthetic auxins and triazines such as MCPA or terbutylacin, or agents such as Kerb, Goal, Aurora and Sumimax for pre- and post-emergence use. In contrast, wine grape producers may consider natural remedies such as vinegar-based bio-herbicides or mixtures of essential oils, plant extracts and natural surfactants. Technologies such as drones and weed control devices (“green seeker” technology) can be used for precision application to reduce the chemical footprint and save costs.

“Although it offers an alternative to conventional weed control, it is important to note that these remedies can sometimes be less effective, less convenient and more expensive,” says Hannes.

Contact herbicides will be less effective on larger and more hardy or perennial weeds and require multiple applications. Selective post-emergence herbicides are convenient, but more expensive and synthetic auxins are effective on perennial broadleaf weeds, but have a negative effect on root uptake.

“Wine grape producers can control weeds by using alternative methods, as well as through a variety of mechanical options,” says Francois Viljoen of Vinpro’s Gen-Z Vineyard Project. Other control methods include the use of cover crops in the work row and mulching with straw or wood chips under the vine.

For mechanical control in the work row, weeds can be rolled flat, mowed with brush cutters or mulchers, or worked into the soil via tillage actions (harrows and disc or cultivator ploughs). On the berm, the weeds can also be incorporated into the subsoil with a weeder, power harrow and cultivator or off-set disc plough, or if a producer chooses not to disturb the soil, the weeds can also be controlled by cutting actions only.

Other alternatives include the use of new technology that moves through the vineyard and removes weeds with steam, gas flames or foam. Biodegradable plastic can also be applied to vineyards to curb weeds and some wine grape growers return to traditional methods such as horse-driven ploughs and controlled animal grazing.

“Mechanical weed control is a more environmentally friendly and sustainable approach as no chemicals are used. The tillage also leads to better water uptake and aeration,” says Francois.

However, tillage can also have a detrimental effect on the soil structure, microbial activity and destruction of fine roots in the topsoil, and certain actions can damage the vines’ stems, or cannot be applied in younger vineyards. Since it is labour intensive, mechanical control can be more expensive, and due to the tractors used, can lead to higher carbon emissions. The compaction of soils due to repeated actions and movement in the vineyard can also become problematic.

“Not all weed and fungus control actions can be applied effectively to any site, vineyard or business model. Do your homework properly on the options available and apply only those that will work best for your vineyard and cost model,” says Conrad Schutte of Vinpro.

He advises producers to work closely with their viticulturists and the suppliers of the relevant chemical or mechanical agents and equipment. The Winetech Vineyard Forum is a group of about 90 viticulturists, researchers and academics in the South African wine industry who meet regularly with the aim of exchanging the best vineyard technical knowledge and practices.

As part of the South African wine industry’s 364th birthday celebrations next year, under the campaign SA WINE HARVEST... END_OF_DOCUMENT_TOKEN_TO_BE_REPLACED

The Consumer Goods and Services Ombud (CGSO) has recently conducted market research, after which several wineries have been identified... END_OF_DOCUMENT_TOKEN_TO_BE_REPLACED
Go Back