Wine grape vineyards on the road to recovery after debilitating drought 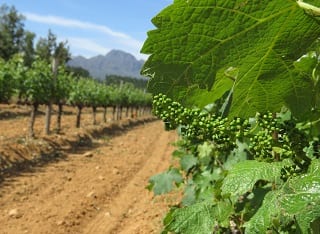 The South African wine industry expects at this early stage that the 2019 wine grape crop will return to normal levels in most regions thanks to good rainfall hot on the heels of a three year-long drought. The Klein Karoo however, is still experiencing a serious water shortage.

The size and quality of the 2019 wine grape crop will be further influenced by weather conditions in the flowering period and leading up to harvest, together with the vineyards’ ability to recover from the drought and the relevant region’s area under vines.

This is according to a preliminary report on regional conditions that was recently compiled by the viticultural consultants of wine industry body Vinpro, and released by SAWIS (SA Wine Industry Information and Systems).

“The dry, warm conditions that dominated the 2018 harvest season, have persisted in the post-harvest period, which in certain cases has had a positive effect on leaf drop and the accumulation of essential reserves,” says Francois Viljoen, manager of Vinpro’s Viticultural Consultation Service.

All regions experienced good cold conditions during the winter and rainfall was higher than last year, with the exception of the Klein Karoo, which is still suffering from a serious drought. Spring has set in earlier than normal, and the vines initially started to bud earlier than normal. In September, temperature fluctuations delayed vine growth however, and in certain cultivars resulted in late and uneven bud burst. Rain in September also prompted producers to increase their management inputs with regard to canopy and fungal disease management. By the end of September, temperatures rose again with subsequent good vine growth.

“We will also still have to see how the fluctuating weather conditions experienced during October play out in the vineyard,” says Francois.

The most important catchment dams, namely the Theewaterskloof (58%), Berg River Dam (99%), Steenbras Dams (both above 70%), Brandvlei Dam (59%) and Clanwilliam Dam (96%) were fuller than last year by the beginning of November. Groundwater levels are also looking more positive in the Swartland, where producers mainly cultivate dryland vineyards.

According to Francois the greater availability of water contributes to the industry’s expectation that the wine grape crop will return to normal levels in most regions, “provided that the favourable weather conditions continue and no excessive wind, heat or rainfall occur leading up to the 2019 harvest, which normally kicks off at the end of January”.

Low reserve levels due to the previous three years’ drought, as well as a shrinking area under vines in the majority of regions, will be decisive factors with regard to the 2019 harvest. The total hectares under wine grape vineyards in South Africa shrunk by 1 296 ha in 2017 measured against the previous year. “On the positive side, we are seeing a revival in wine grape vineyard plantings in 2018,” says Francois.

In the Klein Karoo the drought conditions that have been prevalent since 2015 still continue. The region experienced sufficient cold, but the rainfall throughout the season in parts like Calitzdorp, Ladismith, Oudtshoorn and Barrydale was far below the average and dams are nearly depleted.

By the beginning of November, the Calitzdorp Dam was only 13% full compared to 22% at the same time last year. The Gamkapoort Dam has already been empty for the last three years.

“Producers in the Klein Karoo receive no water from a water scheme, and thus are dependent on water from the Swartberg Mountains and surrounding ravines. A heat wave mid-October, together with strong winds, dried up this water supply even further,” says Jandré Human, manager of Barrydale and Ladismith Cellars.

The region usually receives south-eastern rain in April/May and again in October/November. No significant rain has fallen in these periods thusfar, and producers in the region are of the opinion that vine growth will truly be impeded if no rain occurs in the next two to three weeks.

“Where flood irrigation has been applied, it appears that vineyards are doing better as roots are distributed more widely, whereas in vineyards that are drip irrigated, the roots are focused around the dripper and therefore do not have the same reach to get access to water,” says Danie van der Westhuizen, manager of Calitzdorp Cellar.

As a result of the drought, reserve levels of vines are also very low and it is expected that the wine grape harvest in the Klein Karoo will be significantly lower for a third consecutive year.

“Although we are grateful for the rainfall and increase in available water supplies in most of the other wine grape growing regions, our hearts go out to our wine grape producers in the Klein Karoo region who are under severe pressure – not only in terms of the persistent drought and subsequent effect on the wine grape crop, but also the fact that it will affect the already precarious financial position of these producers even further,” says Rico Basson, Vinpro Managing Director.

Water supplies in the Olifants River region, which was hardest hit of all the regions by the severe water shortages during the 2018 wine grape season, are looking better due to good rainfall and a full Clanwilliam Dam which is currently in the process of being expanded. “It will however, still take quite a while for vineyards in this region to fully recover, and in the meantime it is still a challenging time for the wine grape producers there,” says Rico.

As part of the South African wine industry’s 364th birthday celebrations next year, under the campaign SA WINE HARVEST... END_OF_DOCUMENT_TOKEN_TO_BE_REPLACED

The Consumer Goods and Services Ombud (CGSO) has recently conducted market research, after which several wineries have been identified... END_OF_DOCUMENT_TOKEN_TO_BE_REPLACED
Go Back