Liquor sales open, but wine industry hit with other setbacks

Shortly after South African wine businesses could catch their breath following the partial (now complete) reopening of liquor sales, which would enable them to move their stock to make way for the 2021 wine grape crop, the industry was hit with further setbacks. What lies ahead now?

The third ban on local liquor sales was partially lifted on 1 February 2021. Cellars could start moving the roughly 645 million litres of carry-over stock (of which 300 million litres were not contracted) to stimulate much-needed cash flow and make room in time for the 2021 wine grape crop to be taken in.

However, the relief was short-lived following the announcement of minimum wage, electricity and excise duty increases of 16%, 15% and 8% respectively in the past month. This while the income at farm and cellar level is expected to remain under pressure for some time due to the current stock situation and extended payment terms that are being pushed down the value chain.

“From an average bottle of wine sold at R45, government earned R10.04 from excise and VAT before the latest increases were implemented, compared to the wine grape producer’s net farming income of 77c per bottle,” says Vinpro MD Rico Basson. 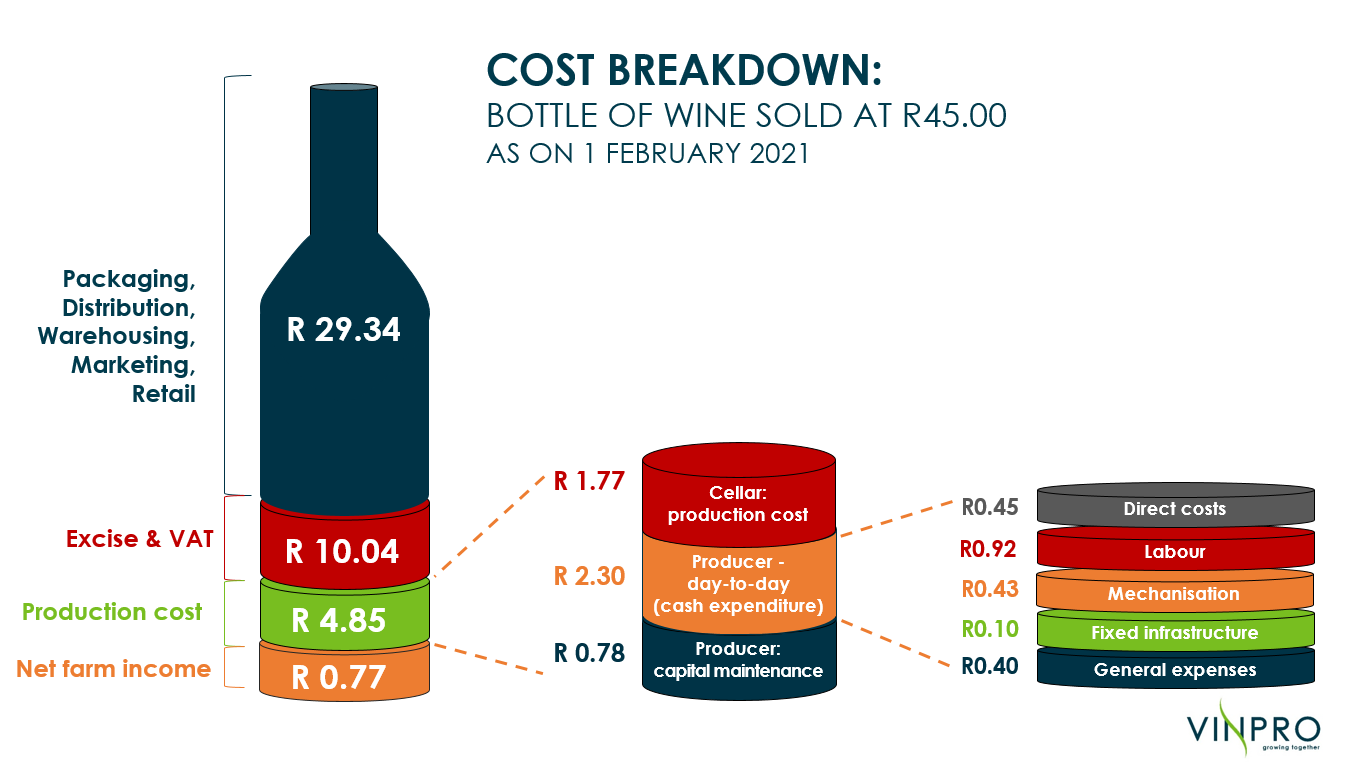 The 8% excise increase implies that 26c more is now charged on a 750 ml bottle. If retailers do not adjust their shelf prices by this amount – which is often the case – primary grape producers will eventually have to absorb this amount as well. Add to that a hike of 12c in wages and 3c in electricity, and the average producer could pay almost 41c more, which will place even further pressure on the producer’s current 77c net farm income. 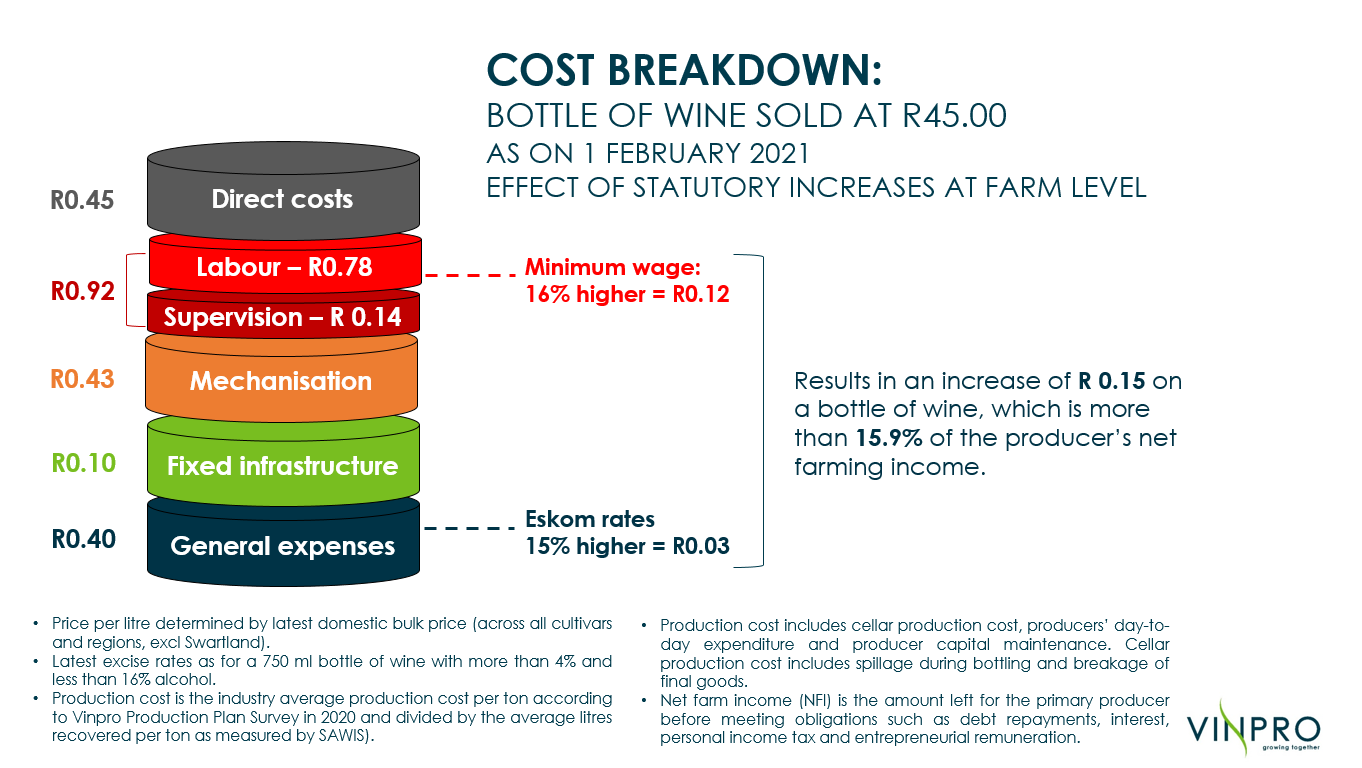 “Given the serious financial hardship our industry is currently facing, we now need stability, policy certainty, financial relief and support. The higher-than-expected increases detract from this and could inflict a final blow to many businesses that are already on their knees, which in turn will contribute to the already large number of job losses and intensify the socio-economic challenges in these communities.”

Over the past number of years, government has earned more from excise duties and VAT than producers themselves. According to the latest estimate by SA Wine Industry Information and Systems (SAWIS), the state earned a total of R6.2 billion in 2020, compared to producer revenue of R5.6 billion. “It is a risk-free income for the government, while producers bear all the risk – a risk that has been increased exponentially over the past year,” says Rico.

In addition to the large cost hikes now being imposed on producers, the wine industry has lost an estimated R8 billion in direct revenue in the past year due to a ban on local liquor sales, cutting off sales revenue for a total of 20 weeks since March 2020. According to SAWIS, the volume of domestic wine sales decreased by 72.7 million litres (20%) to 290.4 million litres in 2020, compared to 363.1 million litres in 2019.

On the plus side, the export volume of 319.2 million litres was equivalent to that of 2019 – despite a five-week ban on liquor exports and logistical challenges thereafter – and the value of these wine exports increased by 7.7% to R9.1 billion. “We are grateful to our overseas supporters and believe we will be able to build on this in 2021,” Rico says.

However, the fact that local sales are now fully open does not mean that wine businesses will catch up on their lost income overnight, says Rico. According to research by FTI Consulting, a sudden increase in sales was observed every time the ban was lifted, but in reality it represents only a 10% recovery in sales volumes. “Although it shifts volumes and brings in vital income, it is not sustainable or responsible for cellars to sell their wines at great discounts now.”

The cycle must continue 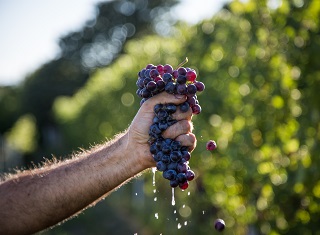 Wine grape producers’ profit margins are squeezed even further due to the latest hikes in excise, wages and electricity. (Photo: Shutterstock)

“The vineyard is a living plant; you can’t put your production practices and costs on ice because you don’t have a consistent revenue stream. The cycle must continue,” Rico says.

In 2020, the average wine grape producer earned a net farm income of R13 951/ha, almost 32% lower than in 2019 and less than half of the R36 500/ha needed on average for producers to farm at an economically sustainable level.

According to the Vinpro Production Plan survey among 257 wine grape farms, this drastic decrease can mainly be attributed to an 8% increase in total production costs (cash expenses and provision for replacement included) and a meagre 0.53% increase in gross income. “We generally had better rainfall in the 2020 season, which means that greater input was needed in terms of fertilisation, crop protection, weed control and labour. Gross income in turn was supported by better yields, which could counteract lower demand and average industry prices to some extent,” says Pierre-André Rabie, senior agricultural economist at Vinpro.

With labour accounting for the bulk of cash expenditure at 40%, the minimum wage increase will have a serious effect on the wine industry. Vinpro was disappointed after Minister Nxesi of the Department of Labour and Employment rejected the representations of the wine industry and other agricultural organisations to government regarding the drastic minimum wage adjustment. “We’re afraid that in the current climate, producers will simply not be able to absorb the minimum wage increase and will inevitably employ fewer people or look at mechanisation as more affordable options. This will have far-reaching socio-economic consequences on broader wine industry communities,” Rico says.

Only 23% of the Production Plan participants farm at a profit of more than R36 500/ha, compared to 32% who are not profitable at all. Even more worrying is the fact that the number of producing hectares continue to shrink, and the industry may face shortages in certain (especially premium) cultivars over the next few years.

“Apart from obvious challenges regarding stock levels and cash flow, the turbulent year we’ve experienced has also exposed cracks in many cellars and farms’ business models,” says Pierre-André. He advises wine-related businesses to look at their vineyard composition from a long-term perspective and find ways to manage costs more efficiently throughout the value chain. “Think, for example, of alternative sales channels such as e-commerce, which are becoming increasingly popular with consumers and can reduce certain costs throughout the chain. The industry is also expected to see an increase in the number of business consolidations.”

“It remains a priority for Vinpro to prevent the South African wine industry and its value chain from being disrupted going forward due to an increase in Covid-19 infections and hospitalisations,” Rico says. “That is why we are continuing with the court case according to which we argue that decision-making with regard to a potential liquor ban must take place at provincial level in the future, as opposed to the previous blanket ban imposed throughout the country. The court case will be heard in the Cape High Court at the end of April 2021. Meanwhile, we are very closely involved in various discussions at provincial and national level regarding legislation and shifting decision-makers’ negative perception of liquor with proven facts.”

The organisation is continuing with requests to various government departments for financial relief and support – of which a wine tourism stipend, support to emerging farmers and excise deferral have already been granted – and keeps financial enterprises informed about the state of the industry so that they can support their wine-related clients to the best of their ability.

Finally, it is important for individual businesses and the industry as a collective to focus strongly on opportunities in the local and international market. “Our respective actions in the short term are important to stabilise the industry, but it is now crucial to grow through an increase in sales and taking advantage of new opportunities. Vinpro will work closely with other partners and our members to provide as much support as possible to unlock value,” Rico says.

One of these opportunities is the complete reopening of wine trade in South Africa from 1 March 2021. “We are relieved that the wine industry can rebuild itself at full capacity now that liquor sales may continue under normal licensed conditions. Let us continue to cultivate, produce, advertise and sell our products in a safe and responsible manner, while encouraging responsible consumption, in order to keep ourselves and others safe, and keep our industry open,” Rico says.

As part of the South African wine industry’s 364th birthday celebrations next year, under the campaign SA WINE HARVEST... END_OF_DOCUMENT_TOKEN_TO_BE_REPLACED

The Consumer Goods and Services Ombud (CGSO) has recently conducted market research, after which several wineries have been identified... END_OF_DOCUMENT_TOKEN_TO_BE_REPLACED
Go Back