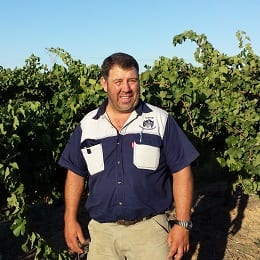 Nicolaas Geldenhuys from the farm Klipvlei.

The farm Klipvlei was announced as the winner of the 2016 VinPro/Winetech Vineyard Block Competition in the Swartland/Paarl region last week.

“This year’s theme was Chenin Blanc blocks that are farmed for the fruity bottled wine segment. This is a challenging category, as sustainability is dependent on both good production and quality,” said Hanno van Schalkwyk, VinPro viticulturist in this region.

All entries were at a very high standard and the Geldenhuys brothers of Klipvlei were closely followed by the runners-up, namely J de Villiers from Cedar farm and Van der Byl Brink of Panorama farm.

“The participants demonstrated that Chenin Blanc can be successfully produced to this end through innovation, based on scientific principles,” said Hanno.

Examples include the use of varying trellis systems such as Smart Dyson, free shoot and hedge systems based on the circumstances. Short term practices such as pruning, suckering and topping shoots were also adjusted according to the wine end goal. Scientific principles were applied well, with irrigation and fertilisation being done according to analyses and adjusted with good judgment to enhance profitability.

The VinPro/Winetech vineyard block competition is held annually in the respective regions to identify, celebrate and share best viticultural practices.

As part of the South African wine industry’s 364th birthday celebrations next year, under the campaign SA WINE HARVEST... END_OF_DOCUMENT_TOKEN_TO_BE_REPLACED

The Consumer Goods and Services Ombud (CGSO) has recently conducted market research, after which several wineries have been identified... END_OF_DOCUMENT_TOKEN_TO_BE_REPLACED
Go Back