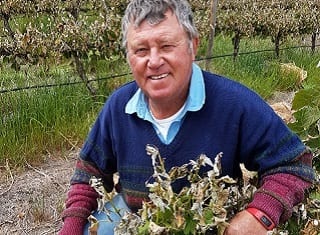 Gerdie Hugo of Eureka Farming in the Scherpenheuwel region shows the damage black frost had caused to a block of Colombar. Picture: Pierre Snyman

Wine grape producers in the Breedekloof, Robertson and Worcester regions have again suffered damage this year with white and black frost occurring early in October. This, together with the drought will put pressure on the 2018 harvest.

Frost is a threat for vineyards at this particular stage of the growth cycle of the vine because flower clusters are small and extremely vulnerable. The biggest damage was caused in the Worcester region where flower clusters were completely killed off on certain farms with specific reference to Aan de Doorns and the Scherpenheuwel area as well as Stettyn and De Wet cellars.

“Damage was observed in especially the lower-lying areas with clear gulleys along which the cold moved,” says Pierre Snyman, VinPro viticultural consultant in the region. The cold air pooled up in the hedges and berms and inflicted great damage which may have an effect on the 2018 harvest and result in losses for both the producer and cellar in terms of wine contracts.”

“Vine shoots were in most cases killed back to near the cordon; the crop therefore is completely lost on most of the vines. The challenge now is to manage the vineyards carefully in order for there to be well ripened canes in the winter of 2018 for pruning purposes.” According to Pierre they are expecting losses of between 10 000 and 15 000 tons.

In the Robertson region widespread damage was also reported, from Eilandia to Bonnievale and again mainly in the lower-lying areas. Here, however, black frost occurred which could result in losses of between 10 000 and 15 000 tons.

“Wine grape farmers are currently working hard to get practices into place to recover a part of the crop and ensure good wood to prune back in the 2018 winter,” says Hennie Visser, VinPro viticultural consultant in this region.

Significantly less damage occurred in the Breedekloof, but traditional frost sensitive areas were hit by white frost. There hasn’t been complete losses in production however and the large majority of vines should recover fully.

“In most cases a crop loss of 20% in the affected areas has been reported with an estimated loss of 10 000 tons,” says Leon Dippenaar, VinPro viticultural consultant in this region. “The total loss in crop mass is still unknown however.”

Earlier this year there was also frost damage in the Orange River region with losses of up to an estimated 10 000 tons.

Although the frost conditions were predicted and producers acted proactively by means of pulse irrigation and spraying machines that sprayed water in every fourth vine row, the cold conditions were simply overwhelming.

“While we cannot control the weather, the South African wine industry has established a network of weather stations in the past few years, enabling us to tackle challenges proactively,” says Francois Viljoen, VinPro Consultation Service Manager. “We are also continuously learning from other industries and countries about new technology and practices to offer resistance to these frost conditions.”

As part of the South African wine industry’s 364th birthday celebrations next year, under the campaign SA WINE HARVEST... END_OF_DOCUMENT_TOKEN_TO_BE_REPLACED

The Consumer Goods and Services Ombud (CGSO) has recently conducted market research, after which several wineries have been identified... END_OF_DOCUMENT_TOKEN_TO_BE_REPLACED
Go Back