Focus on irrigation: from natural resource to scarce commodity 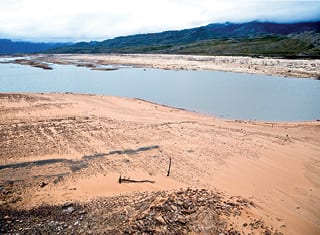 The old adage, “You don’t miss your water until the well runs dry” rings particularly true now we’re in the midst of a drought. Waterwise changes must be implemented and sustainable.

The ongoing drought means that increasing focus is being put on the reuse of water in the wine value chain, and more specifically on the reuse of winery water for the irrigation of vines. But before water can be reused for irrigation, several aspects must be taken into account. In some cases water may simply not be fit for irrigation.

“When reusing water for irrigation, it’s important that it doesn’t damage the soil,” Dr Philip Myburgh of the ARC Infruitec/Nietvoorbij cautions. “Also, the water must not have a negative effect on the growth or yield of the vine. Finally the wine quality must not be affected.”

Dr Myburgh explains that winery water destined for vineyard irrigation has to be regularly analysed for chemical oxygen demand (COD), potassium, sodium and electrical conductivity (EC). If the COD is too high, excessive accumulation of organic material in poorly aerated soil can lead to an unfavourable root environment. Too high levels of sodium could be toxic to the grapevine. Furthermore, if the sodium adsorption ration (SAR) is too high, it could have negative effects on the soil physical status. High potassium levels could lead to high pH in wine which could cause colour instability in red wine. The EC (which gives an indication of salts in water) is also important, as high salt levels will increase the osmotic potential of soil water. This may impede water uptake by roots.

Several steps should be taken before winery wastewater can be used for irrigation. Dr Myburgh says, “A first step is the screening of course particles followed by lime addition to increase pH. Downstream sedimentation dams will facilitate particle removal. Aeration, which decreases COD, could then be done, but note that an electrical system could by costly. Water can also be diluted to decrease COD to 3 000 mg/l or below. This parameter is specific for the reuse of water in sandy soil in areas with sufficient winter rain such as the Breede River Valley.”

VinPro viticultural consultant Hanno van Schalkwyk has come up with some practical guidelines for the management of grapevines during drought periods. Keep in mind however these guidelines and practices must be tailored to the specific area, climate, soil type and wine goal, and are not meant to be an exhaustive guide to grapevine management. For a more detailed document go to https://vinpro.co.za/?s=drought.

Several factors come into play where plant water use, evaporation and irrigation are concerned. Keep the following in mind:

Covering agents such as mulch limits surface run-off and evaporative losses. Also note that later in the season mulch results in a higher soil water content, compared with bare, undisturbed soil or soil where shallow tillage took place. Cover crops that still actively grow in spring can compete with grapevines for water, so rather opt for annual cover crops with shorter growth cycles that suppress weeds. Note that some cover crops are a good source of mulch at the end of their growth cycle. This can aid weed suppression, keep soil temperatures lower and decrease soil evaporative losses.

Big crops can delay ripening or grapes might not mature fully. It follows that delayed ripening means longer hang time and increased heat exposure, thus increased water requirement. High production strategies in dry years should be carefully considered. Where necessary, careful crop reduction by bunch removal can be employed. Where yield is reduced too dramatically, grapevine photosynthesis decreases, which can intensify the effects of drought. The canopy and crop ripening can also be affected.

Producers would be well advised to record water usage, fruit quality and yield achieved. This information will help with planning in the dry years that may follow and it may be necessary to adjust yield and predicted quality based on water availability.

As published in the July 2017 issue of WineLand magazine.

As part of the South African wine industry’s 364th birthday celebrations next year, under the campaign SA WINE HARVEST... END_OF_DOCUMENT_TOKEN_TO_BE_REPLACED

The Consumer Goods and Services Ombud (CGSO) has recently conducted market research, after which several wineries have been identified... END_OF_DOCUMENT_TOKEN_TO_BE_REPLACED
Go Back