The Western Cape Agriculture Forum, an inclusive, voluntary association of agricultural organisations and commodities active in the Western Cape, will seek to promote growth in the sector and aims to advocate consensus on national level regarding strategic issues within agriculture.

“The forum aims to advocate consensus positions to the national and provincial government, regional structures and bodies and the international community on matters of mutual concern to the agricultural sector in the Western Cape,” he said.

Mr John Durr, chairman of the Western Cape Red Meat Producers Organisation and member of the Western Cape Agriculture Forum management committee, said agricultural commodities and associations have too much in common not to work together. “The newly established Western Cape Unity Forum will be of cardinal importance in the future, especially with regards to assisting emerging farmers,” Durr said.

According to VinPro’s Managing Director, Mr Rico Basson, the forum will assist to establish a unified perspective on a number of key aspects. “This will ensure a more sustainable and prosperous agricultural industry in the Western Cape,” he said. Basson was also elected on the management committee of the Western Cape Agriculture Forum. 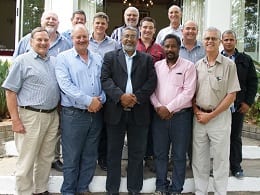 As part of the South African wine industry’s 364th birthday celebrations next year, under the campaign SA WINE HARVEST... END_OF_DOCUMENT_TOKEN_TO_BE_REPLACED

The Consumer Goods and Services Ombud (CGSO) has recently conducted market research, after which several wineries have been identified... END_OF_DOCUMENT_TOKEN_TO_BE_REPLACED
Go Back