Harvest time is in full swing in South Africa, but had a slow start in many regions this year due to cooler seasonal conditions. Although the cooler weather brings about some challenges in the vineyard, it also contributes to exceptional colour and flavour in this year’s wine grape crop. Vinpro’s regional viticulturists reveal more.

According to the latest estimate by SAWIS (South African Wine Industry Information and Systems) and Vinpro in February, the wine grape crop is expected to be only somewhat larger than in 2020, but still smaller than the 15-year average of 1.37 million tons.

“Most wine grape growing regions are harvesting about two weeks later than normal after consistently cooler weather throughout the season. We also haven’t experienced any of the normal heat waves since the start of the growth and ripening period, which help limit sunburn damage, while maintaining flavour,” says Conrad Schutte, manager of Vinpro’s consultation service department.

“With the grapes being harvested much later, most of the cellars at this stage have received a smaller share of their normal grape intake. The next crop estimate, which will be processed and issued mid-March, should provide a clearer indication of the trends with regard to crop size,” says Conrad.

Vinpro’s viticulturists shares the latest update on harvest time in the respective regions:

“Stellenbosch producers are harvesting 10 to 14 days later than usual, due to the cooler weather conditions,” says Etienne Terblanche. “Sauvignon Blanc is being taken in, along with the last bit of Pinotage and the flavour and colour concentrations look fantastic at this stage.”

“In the Cape South Coast region, which is already a cool climate region, the cooler season meant that the grapes were much slower to ripen than in other regions,” says Etienne. “However, the Cape South Coast region extends as far as the Agulhas Triangle, where the weather conditions were slightly warmer and producers could already start harvesting. After good winter rainfall, the quality is excellent, with good acidity and the red grapes in particular have good colour. Closer to the Hemel-and-Aarde Valley, it is still too early to tell, but some of the sparkling wine producers in Elgin who have already harvested are excited about the quality.”

“Harvest time in the Olifants River region is quite disorderly at this stage,” says Gert Engelbrecht. “The relatively cool spring and summer contributed to the grapes being taken in on average about two weeks later than normal. However, not all cultivars are ripening later, which leads to congestion in cellars and completely disturbs our normal harvesting pattern. The trick now is to harvest grapes at the right sugar levels. On the plus side, the fact that the region has not yet experienced severe heat has resulted in good flavour and colour development. ”

“This was probably the coolest summer in five years in the Paarl and Swartland region, which moved harvest time on by up to two weeks,” says Hanno van Schalkwyk. “Chenin Blanc and Pinotage were harvested in the last week of February, with Merlot and Shiraz expected to be ready from the beginning of March. The grapes look promising, with good flavour and colour. Despite dry soils that still present a challenge in the vineyard – this mainly dryland region did not receive any rainfall in December or January – the cooler weather helps the grapes to come in nicely.”

“Producers in the Robertson and Little Karoo regions are harvesting on average two to three weeks later than usual,” says

Hennie Visser. “In the first two weeks of February, very hot weather led to slower sugar accumulation, but after the moderate weather from mid-February, we again saw good sugar levels. Sauvignon Blanc and Chardonnay were harvested in the last week of February, while Chenin Blanc should be harvested in all seriousness in the first week of March. The vineyards are also healthy with almost no rot. We have noticed that the season is starting to change, with cooler mornings and even dew occurring in some areas. ”

“Harvest time is about three weeks late in the Worcester and Breedekloof regions, but is already well underway,” says Pierre

Snyman. “Sugar monitoring is a big challenge this year, and we’ve started experiencing dew since mid-February, which suppresses ripening even further. Along with this, the fact that the region is taking in a large harvest puts pressure on cellar space.”

“Heavy rain showers occurred in certain parts of the Northern Cape during January, together with humid and hot weather that fuelled the occurrence of fungal diseases such as botrytis rot and downy mildew, and could have a negative effect on bunch volumes,” says Conrad. 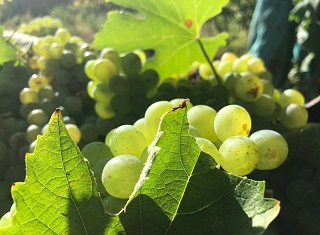 What do you harvest when?

Ever wondered which grape varieties are harvested first?
Here is a general guideline, which can vary from region to region, and depend on the weather conditions:

Contact Vinpro’s team of soil scientists and regional viticulturists for customised advice in the vineyard.

As part of the South African wine industry’s 364th birthday celebrations next year, under the campaign SA WINE HARVEST... END_OF_DOCUMENT_TOKEN_TO_BE_REPLACED

The Consumer Goods and Services Ombud (CGSO) has recently conducted market research, after which several wineries have been identified... END_OF_DOCUMENT_TOKEN_TO_BE_REPLACED
Go Back