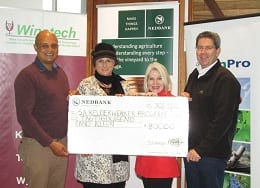 The South African wine industry will honour its top cellar workers at an informative information day at the end of October.

The wine industry organisations VinPro and Winetech fund the South African Cellar Worker Programme, a series of study groups attended by more than 300 Afrikaans and Xhosa speaking cellar workers throughout the Western Cape from April to September. The training included theory and practical tasting.

Following theoretical and practical evaluation, the top 11 cellar workers were chosen from the group. They are:

The top three cellar workers and winner will be announced at the Cellar Worker Information Day, which is sponsored by Nedbank Business Banking and will form part of the Agri Cape Week agricultural expo in Worcester on 30 October. The topics to be discussed include South Africa’s brandy specifications, personal finances, stories from the cellar and correct yeast management. The winner of Agri’s got Talent 2015, Armando Baartman, will also perform at the event.

“The South African Cellar Worker Programme aims to empower cellar workers, celebrate excellence and foster mentorship in the South African wine industry. We are grateful to every cellar who entered their staff for the study groups,” said Santi Basson, project coordinator.

“The wine industry is an important contributor to the Western Cape economy, and its cellar workers are an integral part of it. Nedbank is proud to sponsor the Cellar Worker Information Day, during which this exceptional group receives recognition,” said Helmien Havenga, Nedbank Business Banking’s area manager in Worcester.

Attendance of the Cellar Worker Information Day is on invitation only.

As part of the South African wine industry’s 364th birthday celebrations next year, under the campaign SA WINE HARVEST... END_OF_DOCUMENT_TOKEN_TO_BE_REPLACED

The Consumer Goods and Services Ombud (CGSO) has recently conducted market research, after which several wineries have been identified... END_OF_DOCUMENT_TOKEN_TO_BE_REPLACED
Go Back