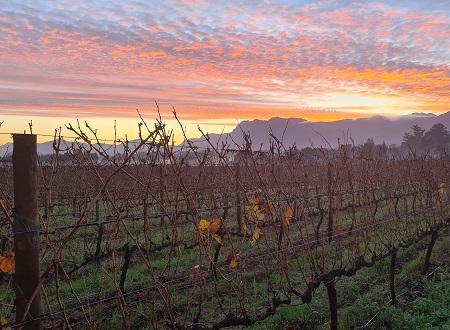 After an early autumn and warm weather mid-June, winter is now well underway, and the cold, rain and snow bode well for wine grape vineyards that are resting in preparation for the 2022 harvest.

“We are grateful that we’ve had a very good winter thus far,” says Francois Viljoen, manager of Vinpro’s Gen-Z Vineyard Project. “The cold weather that we’ve been experiencing since the end of June is sufficient to keep vineyards dormant, and the snow and high rainfall are replenishing groundwater sources and dams for the rest of the season.”

However, the run-up to the 2022 season didn’t have a smooth start, characterised by the late 2021 harvest and earlier than normal discoloration and leaf fall in the vineyard. “Unexpectedly high rainfall around 7 March 2021 delayed harvesting considerably, especially in the coastal regions, with some producers only being able to finish harvesting in April,” says Francois. Because the grapes were on the vines for a longer period of time, post-harvest fertiliser could only be applied later in the season. After the rainfall, producers also had to rush to get fungal diseases and rot under control. These diseases in turn contributed to autumn discoloration and leaf fall already occurring by the end of March.

“After the previous season’s grapes are usually harvested by the beginning of autumn, it is important for vineyards to build up reserves to protect them throughout the winter and prepare them for the next harvest,” says Francois. “The reserves are built up in the shoots, stem and root in the form of starch and serve almost as a kind of antifreeze for the vine.”

Vineyards should also have enough reserves to carry them through the first few weeks of spring when it warms up again. While the first leaves are still too small to adequately photosynthesise, the reserves help meet the vine’s growth requirements until the vine reaches a shoot length of about 30 – 50 cm and leaves are large enough to be self-sufficient.

“Once the leaves start to discolour and fall in autumn, the photosynthesis that serves to build up these reserves gradually decreases and eventually stops. That’s why it’s important that the leaves remain healthy after the previous harvesting season, from March to May,” says Francois. Vineyards that are infected with the leafroll virus, typically discolouring to a reddish brown colour and undergoing leaf fall earlier than healthy vines, are especially less prepared for next year’s harvest.

The rest of the autumn conditions were favourable, characterised by good rainfall in early May which was beneficial for sowing cover crops, as well as cooler temperatures which allowed vineyards to enter their dormant period.

After a good transition from autumn to winter, the Western Cape experienced unusually hot, dry weather mid-June, which dried up the soils and had a straining effect on cover crops. After this, however, winter arrived in all its glory in the province, bringing good cold weather and sufficient rainfall, which keep vineyards dormant and are beneficial for cover crop growth.

“The new trend that we have noticed over the past few years is that winter is busy moving on. The majority of the rainfall and cold weather are now more common in July and August, while the weather conditions in June are still quite inconsistent,” says Francois.

Although wine grape producers had to postpone their pruning programmes a bit due to the hot weather in June, pruning teams are now very busy in the vineyard. “The golden rule is not to prune on rainy days, as fresh pruning wounds on these days can increase the chance of vines getting the grapevine disease eutypa dieback,” says Francois.

For more advice on the vineyard, contact Vinpro’s team of regional viticulturists.

As part of the South African wine industry’s 364th birthday celebrations next year, under the campaign SA WINE HARVEST... END_OF_DOCUMENT_TOKEN_TO_BE_REPLACED

The Consumer Goods and Services Ombud (CGSO) has recently conducted market research, after which several wineries have been identified... END_OF_DOCUMENT_TOKEN_TO_BE_REPLACED
Go Back