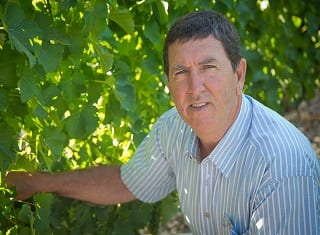 Wine grape producers and cellars will be taking in the last of a significantly smaller 2018 wine grape harvest.

According to SAWIS (SA Wine Industry Information & Systems) viticulturists and cellars estimate that 2018 will record the smallest crop since 2005.

The fourth harvest estimate was performed mid March, at which time close to two thirds of the harvest had been taken in by cellars.

“Nearly all white cultivars have been harvested, with a few late blocks being harvested in the next two weeks,” says Francois Viljoen, manager of the wine industry body Vinpro’s viticultural consultation service.

Shiraz and Cabernet Sauvignon is currently being harvested, of which Shiraz is especially slow to ripen this year.

The harvest season was preceded and kicked off with very dry, hot weather conditions, after which February brought cooler nights, which is ideal for ripening and enhances quality.

According to Francois many regions will continue to harvest until mid April, and the industry is hopeful that the weather conditions will hold and the grapes will be healthy.

The crop size will vary significantly between regions and even farms depending on individual production units’ access to water and other conditions. “Some regions and producers report a larger than expected harvest, while others estimate that it will be even smaller than initially thought. Everyone agrees that the wine grape quality is good given the circumstances,” says Francois.

Vinpro’s viticulturists give an overview of the regions:

Breedekloof: “Frequent wind (especially during flowering), had a big influence on the crop size, along with a water shortage. The bunches are generally loose and small,” says Leon Dippenaar.

Klein Karoo: “A shortage of sufficient irrigation water will lead to a smaller harvest, but the wine quality looks promising at this stage,” says Hennie Visser.

Olifants River: “Water availability to producers was cut by 80% during the season, which has a great impact on the wine grape harvest. The colour and concentration of especially the red wine grapes are better than in 2017,” says Gert Engelbrecht.

Orange River: “Wine grape bunches of especially Chenin Blanc, Colombar and the early red cultivars are much lighter, which is indicative of a smaller yield,” says Henning Burger, viticulturist of Orange River Cellars.

Paarl: “Wine grape berries are small in general. Late cultivars experienced great moisture stress due to the Berg River Dam’s sluices being closed at the end of January. Sunburn damage is prevalent due to extremely hot weather conditions experienced in this region in December and January,” says Hanno van Schalkwyk.

Robertson: “The wine grape harvest will be much smaller due to limited irrigation water and frost damage in October. Wine quality is promising at this stage. Many red cultivars still have to be harvested and the harvest will finish later than usual,” says Hennie Visser.

Stellenbosch: “The bunches are lighter and berries smaller, which has an effect on juice extraction in the cellar. Recent hail will also contribute to a smaller harvest. Certain wine grape producers want to irrigate because their vineyards are taking strain; however no water is available for irrigation,” says Conrad Schutte.

Swartland: “The dry, hot conditions in summer and during the harvest season leads to very small berries that will have a great effect on the total production. However, wine quality looks good at this stage,” says Hanno van Schalkwyk.

As part of the South African wine industry’s 364th birthday celebrations next year, under the campaign SA WINE HARVEST... END_OF_DOCUMENT_TOKEN_TO_BE_REPLACED

The Consumer Goods and Services Ombud (CGSO) has recently conducted market research, after which several wineries have been identified... END_OF_DOCUMENT_TOKEN_TO_BE_REPLACED
Go Back