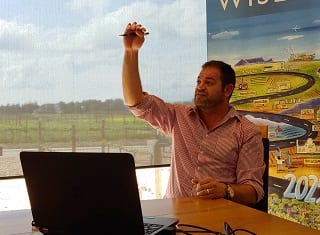 Hennie Visser presenting feedback from a recent trip to Australia.

Vinpro viticultural consultant Hennie Visser attended the 17th Australian Wine Industry Technical Conference and trade exhibition in Adelaide in July this year. Here are some of the insights he brought home.

The conference covered new technologies, recent developments and equipment being used in Australian vineyards. Hennie says while some technologies are still under development, most already exist as working prototypes with proof of concept.

Research into drought and disease resistant rootstocks is a priority, with phylloxera – which was discovered in the Yarra Valley in 2006 – considered a major threat which the Australians are taking very seriously. Another pressing biological risk is root-knot nematodes, as rising temperatures reduce a rootstock’s resistance against this threat. Plant improvement schemes are also focused on improving resistance against ubiquitous botrytis and powdery mildew by crossing vitis vinifera with wild vines containing resistant genes.

Biological controls were prominent throughout the visit and consistently enforced, to the point where guests were often not allowed to step inside the vineyards at all. They were checked at quarantine stations on the road between Victoria and South Australia and signage from vinehealth.com.au was visible everywhere.

Another reason for concern is the small gene pool, with most rootstocks derived from only five vitis species. Since this exposes their industry to risks from disease and climate change, new clones are actively being developed. A mechanised system called the Plant Accelerator allows a large number of seedlings placed on parallel moving belts to be treated simultaneously. The system is fully computerised, making precise measurement and control possible, which yields fast and accurate results.

Drought conditions have led to 101-14 being favoured above vines grafted on the traditional Schwartzmann rootstock in cool climates. According to Hennie, the strong reliance on 1103 Paulsen in warm climates – despite its vulnerability to nematodes – seems short-sighted. South African experience has shown Richter 110 (or 140 Ruggeri) to be better suited to similar conditions, but apparently Australian nurseries weren’t impressed with their poor strike rates and lower profitability compared with the Paulsen.

One particularly exciting system employed hyperspectral imaging to measure MOG (material other than grape) content in real-time, reducing chances of human error due to inexperience or oversight. The system could discriminate between botrytis-infected grapes and clean white or red grapes, and distinguish botrytis from sour rot and other fungal infections. The software can also discriminate different MOG components (leaves, petioles, stalks, wood, canes and insects) from grapes, even in machine-harvested grapes.

A technology which holds potential for South African producers is a 3D frost mapping tool developed by the University of South Australia’s Defence and Systems Institute, which combines sound and thermal data collected by drone to construct a 3D heat map from the ground up to 100 m above the vineyard. This helps assess frost risk and the effectiveness of frost fans or other interventions, while providing valuable historical data on the canopy water stress, spatial growth variations, and irrigation needs across the vineyard.

Estates were generally delighted by recent legislation allowing winemakers to add water to high sugar must, up to a limit of 13.5 Baumé (24.3 °B). Producers who supply to cellars are less impressed, however, saying cellars want the grapes at 28 °B to add water to 24.3 °B, making the wine cheaper while the producer loses out on the weight. At least a limit is imposed!

Many winemakers apparently remarked how more consumers, especially new wine-drinkers, have taken to Pinot Gris. “Pinot Grigio, Vermentino … Young people love anything that ends in -o!” they say. Grenache-Shiraz-Mourvèdre (GSM) blends have become quite popular, with most wineries on their visit selling this blend. Lighter wines with softer tannins are doing well and consumers are better educated, realising every wine doesn’t have to be big and bold. Five years ago producers wouldn’t have been able to sell wines in this style, dubbing the trend “anti-Parkerisation.”

Minimum wage is about A$20 (R200) an hour which is expensive, leading to more mechanisation and a greater prevalence of Eutypa dieback (“tandpyn”). Although most complained about the disease, Hennie found it strange nobody seems to have heard of Trichoderma – a well-known treatment here.

Not everything needs to be new and mechanised though. In Barossa there were “young” Shiraz blocks already 40 years old, with some vineyards almost 170 years old and producing wines worth about R9000 a bottle (limited to one per customer). Vineyards older than 100 are quite common in Barossa, and qualify for a special centenary label.

As part of the South African wine industry’s 364th birthday celebrations next year, under the campaign SA WINE HARVEST... END_OF_DOCUMENT_TOKEN_TO_BE_REPLACED

The Consumer Goods and Services Ombud (CGSO) has recently conducted market research, after which several wineries have been identified... END_OF_DOCUMENT_TOKEN_TO_BE_REPLACED
Go Back