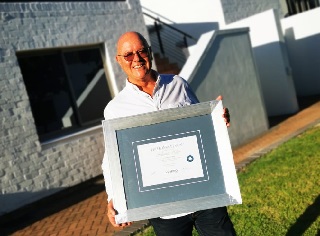 Vinpro honoured Johann Krige, proprietor of Kanonkop Wine Estate near Stellenbosch as an honorary member at an informal event in Paarl on 12 November 2019.

Johann was one of Vinpro’s founding directors when the wine industry organisation opened its doors in 2003. He was also the vice-chairman from 2003 to 2016, as well as chairman of the audit committee and member of Vinpro’s financial and executive committees until his retirement as a board member in November last year.

As a leader and strategist Johann played a pivotal role in the sustainable expansion and expansion of Vinpro as an industry organisation. However, as a fervent ambassador, pioneer and mentor, he has and continues to help promote and grow the South African wine industry.

Since 2017 Vinpro has honoured persons who make a substantial contribution to the organisation and the South African wine industry. Danie de Wet of De Wetshof Wine Estate in Robertson received honorary membership in 2017 and Pieter Hugo of Hugoskraal in Rawsonville was honoured in 2018.

As part of the South African wine industry’s 364th birthday celebrations next year, under the campaign SA WINE HARVEST... END_OF_DOCUMENT_TOKEN_TO_BE_REPLACED

The Consumer Goods and Services Ombud (CGSO) has recently conducted market research, after which several wineries have been identified... END_OF_DOCUMENT_TOKEN_TO_BE_REPLACED
Go Back