The South African wine industry is going through some tough times, but sustainable growth is on the cards. What’s needed is a clear game plan, a stronger domestic market focus, ingenious marketing and a collective drive towards higher price points.

The Nedbank VinPro Information Day in Cape Town on Thursday revealed its annual forecast to around 750 wineries, producers and other role-players in the wine industry value chain. The day centred on ways to unlock value from the farm gate to the shelf. 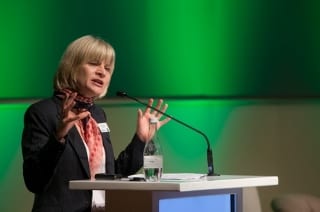 South Africans should not be too optimistic about the economy in 2017, following a challenging year in 2016. Nicky Weimar, senior economist at Nedbank, said the South African economy grew by only 0.4% year on year in the first three quarters of 2016. Slowed growth in China had a significant impact on commodity reliant industries, a vicious drought led to higher food prices, which along with a rise in inflation put pressure on consumer spending.

“Government’s weak finances and political turmoil creates further uncertainty, which will continue to have an impact on the economy in 2017,” said Weimar. She expects GDP to grow by 1.1% in 2017, with the rand forecast to strengthen to R13.85 against the US Dollar and R14.37 against the Euro.

Get the price right

The wine industry is currently in a slump, with only a third of grape producers farming at financially sustainable levels and return on income dropping below 1%. The average farming income is at around R45 000/ha compared to the R70 000/ha required in order to be sustainable. “We need to increase wine prices collectively to get to 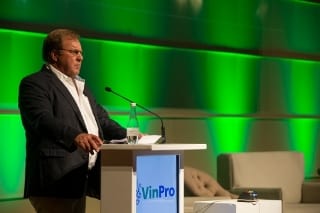 that level. Stop dumping wine at cheap prices in our export markets – it hurts the industry as a whole,” said VinPro chairman Anton Smuts.

According to VinPro MD Rico Basson, it is encouraging that the industry has seen export value growth of 10% to nearly R9 billion, compared to volume growth of 3% to 428 million litres in 2016. “However, bulk wine which is sold at lower prices remain the biggest contributor in terms of volume.” The Wine Industry Strategic Exercise (WISE) target for bulk versus packaged wine ratio by 2025 is 40:60, compared to the current 61:39.

“If the wine industry is in a difficult spot, don’t worry – it’s normal,” said prof Nick Vink, chair of the Department of Agricultural Economics at Stellenbosch University. 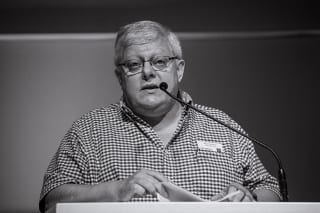 Since the start of the industry in the 17th century, contractions would last for a decade and be much more severe than expansions that lasted around 8.5 years.

Producers and wineries have traditionally focussed on driving quantity rather than quality and although this started to change in the 1970s, sanctions curtailed exports and domestic sales were primarily focused on the white consumer. “Since democracy in 1994, the industry has become heavily dependent on exports, which is now seeing slow growth. It’s time to get back to that earlier drive of quality and refocus on the domestic market to get us out of the current slump,” said Vink.

Basson reiterated the importance of the domestic market, which has seen a hike of 50 million litres in the past two years to 400 million litres. “Again, however, the biggest contributor to this increase is the bag-in-box segment, which is sold at lower prices and needs to be addressed.” 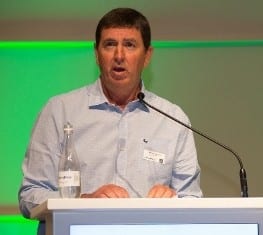 Wine producers and viticulturists expect a harvest close to last year’s size due to heat, drought, black frost, wind and a decline in area under vines. The 2016 harvest amounted to 1.4 million tonnes.

Due to the smaller harvest, as well as an increase in local demand, stock levels are projected to be the lowest in 5 years at the end of 2017.

“Don’t think because you’ve got less wine the price will automatically go up. Wine prices are not driven by availability, but by demand from the consumer for wine as a commodity,” said Michael Fridjhon, wine critic and columnist who led a panel discussion on ways to unlock value in the industry chain.

According to Richard Rushton, group MD of Distell, disruptive marketing efforts and the emergence of five to ten scale brands will strengthen the industry’s brand as a whole. The higher wine prices that will be achieved through this will inevitably be passed down the value chain to the producer. “Building premiums will require time and patience though,” said Rushton.

Gavin Dittmar, MD of national distributor Meridian Wine Merchants, warned against using discounts as a marketing tool. “It’s the quickest race to the bottom. How will we build brands if discount is our only bargaining tool?” he said. He emphasised the value that distribution companies can add as collective marketing vehicle for South African wines. “If we’re the ham in the sandwich between producers and the trade – let’s be parma ham, not polony.”

Wine companies should make sure that their marketers travel extensively to build a relationship and trust with buyers. “You won’t get anywhere with your brand if you only visit an overseas market once a year for five days,” said Neville Carew, CEO of Origin Wine. 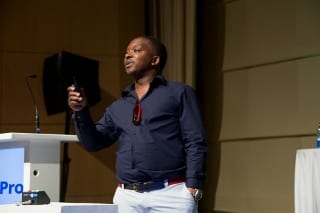 The same applies to the domestic market. Lebo Motshegoa, MD of marketing research company Foshizi, said the black market has its own social calendar. “Know it and interact with them at these events.” Many marketers make the mistake of using the “one size fits all” approach when targeting this market, while the range within this segment is wide and needs to be targeted properly. “They want a product they can relate to, a brand that cares about what they’re all about. And if you’re the first brand to introduce a new category, they will adopt your brand name as the category name and all other brands will have to work around that,” said Motshegoa.

“You don’t have to reinvent the wheel. Make sure you scan the environment continuously and tweak your game plan accordingly,” said Johann Krige, proprietor of Kanonkop Wine Estate. “Don’t try to be everything to everyone – focus on the three things you do best. And start working on your return on investment rather that return on ego,” said Krige.

According to Carew a proper value chain assessment can identify areas in which wine businesses can play smarter. “In many instances a wine’s packaging is more expensive than the content in the bottle. With the high prices of barrels, winemakers do clever things with first, second and third fill barrels,” he said. He also proposed getting past currency fluctuations by negotiating a fixed rate contract over time with buyers abroad.

The same applies to black-owned businesses. “We’ve learnt that passion and sentiment can get you only so far. If you want sustainable success, you need to work just as hard as any other business,” said Denise Stubbs, MD of Thokozani Wines. She referred to a learning curve when being listed at Woolworths. “We had to meet a long list of requirements, including changing the range’s name to Ovation, which would resonate better with South African consumers. It was tough, but we learnt valuable lessons.”

Smuts emphasised the importance of partnerships and collaboration to achieve success in the long run, and thanked Nedbank Business Banking for their involvement in the wine industry, in particular their eleven year sponsorship of the event. Old Mutual and Mutual and Federal Agri participated as co-sponsors. 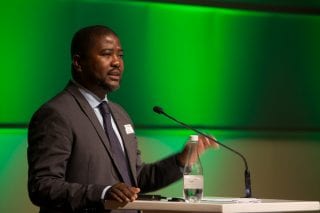 “The wine industry is a key driver of growth in the greater South African economy. For this reason, Nedbank has remained steadfastly committed to the support of the wine industry through sponsorship of the Nedbank VinPro Information day since 2007 as well as support through long term sponsorships of the Cape Winemakers Guild and Nedbank Green Wine Awards,” said Ciko Thomas, Nedbank Group’s managing executive: retail and business banking.

“Nedbank will continue to work with VinPro and other role players to help grow the industry, contributing to the country’s GDP, promoting an entrepreneurial culture and more importantly, creating much needed employment in our country.”
VinPro is the representative organisation for South African wine producers and cellars.

WISE state of the industry

As part of the South African wine industry’s 364th birthday celebrations next year, under the campaign SA WINE HARVEST... END_OF_DOCUMENT_TOKEN_TO_BE_REPLACED

The Consumer Goods and Services Ombud (CGSO) has recently conducted market research, after which several wineries have been identified... END_OF_DOCUMENT_TOKEN_TO_BE_REPLACED
Go Back