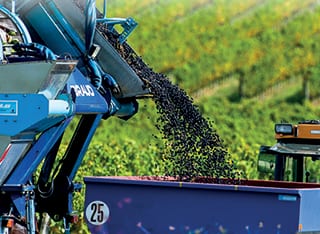 Mechanisation is on the increase in South Africa, especially in vineyards. But is it a viable option for everyone?

Making wine can be profitable, but without proper planning it can become a costly endeavour. Several variables must be considered before investing in mechanisation for instance. It’s a given that owning any machine comes at a certain cost to the producer, namely fixed costs and variable costs. Fixed costs relate to the ownership of machines and include depreciation, licensing, insurance and interest. Variable costs are largely determined by the number of hours the machine is operated over a set period and include maintenance, fuel and repairs.

After careful consideration of the relevant figures, producers also need to consider the various advantages that mechanisation offers. After absorbing the initial impact of the huge initial capital outlay, producers can look forward to increased efficiency as one mechanical harvester can perform numerous functions such as pruning, spraying and harvesting. This means time spent in the vineyard for various operations can be considerably reduced. And don’t forget worker development, especially of permanent workers. The upskilling of workers results in improved quality of work, which in turn results in better quality wine.

It seems therefore mechanisation is a no-brainer, especially if you’re a bigger producer. But despite the benefits, especially when it comes to increased productivity, there are some constraints to consider, says Izak de Beer, a major producer in the Vredendal region. He implemented mechanisation in 1996 and went from 1 400 tonnes total production to 5 100 tonnes in 2017. But this jump comes at a price.

“For me mechanisation was a well-thought-out and logical next step for grape production,” he says. “I’ve owned several models of harvesters and they make perfect financial sense to me. Apart from the various harvesters, I can also use my tractors for several purposes such as soil management, pruning, topping, pole planting and spraying.

There are several factors to consider before investing in a new machine such as a harvester, Izak says. “Return on investment is crucial and you need to properly think things through before buying a machine. Your scale needs to be large enough, as a new machine is too expensive for a small producer. If your scale justifies a machine such as a harvester you could consider a second-hand machine. But keep in mind it can break down and it may be too costly to maintain. Rather invest in new equipment.

A smaller harvester for narrower vineyard rows costs R3,5 million to R4 million, so given the volatile nature of the rand exchange rate your timing must be spot on when making the purchase.”

And then there’s the water issue. “You need to realise there’s a definite and important relationship between mechanisation and water. For instance, vineyards that are mechanically pruned need a third more water than hand-pruned vineyards. This is because mechanical pruning leads to more transpiration. These vineyards also have more buds and bearers and subsequently yield more grapes.

“You need to keep accurate records of how much water per hectare for any given vintage you use, and then use the information to plan for the future. In the end it boils down to a very important question producers who’ve opted for mechanisation have to ask themselves: Do I have too little water or do I have too many vineyards?

“You need to make a mind shift and realise wealth isn’t necessarily measured in terms of hectares, but rather productivity. In short, this means you can work more productively with fewer hectares of vineyard. If water is limited, focus on the productivity of a smaller area under vine rather than on the water deficit for an unmanageable number of vines.”

The decision to mechanise is clearly not one to be taken lightly, but if scale and resources allow for mechanisation profitability will follow.

As part of the South African wine industry’s 364th birthday celebrations next year, under the campaign SA WINE HARVEST... END_OF_DOCUMENT_TOKEN_TO_BE_REPLACED

The Consumer Goods and Services Ombud (CGSO) has recently conducted market research, after which several wineries have been identified... END_OF_DOCUMENT_TOKEN_TO_BE_REPLACED
Go Back