“Take our hand to strengthen yours” – Vinpro AGM 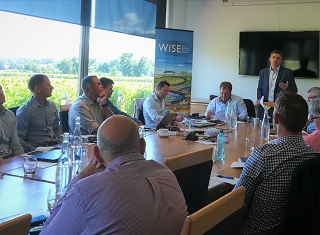 “We build the stadium, level the playing field, play alongside you and help strengthen your team,” said Vinpro MD Rico Basson about the wine industry organisation’s role at Vinpro’s 22nd Annual General Meeting (AGM) in Paarl this morning.

Vinpro doesn’t only address challenges in the short term, but continuously looks ahead and proactively develops and implement the strategies and structures that would be needed to strengthen the industry going forward.

Vinpro and its industry partner (SA Liquor Brand Owners Association) is in frequent discussion with Government on complex issues such as excise tax, land reform and liquor legislation. At the same time, the industry is now reaping the benefits of a Wine Tourism Strategy that was launched in 2017, more drought-resistant Mediterranean wine grape cultivars that Vinpro’s affiliate Vititec imported as far back as 10 years ago are now commercially available to wine producers and the Aware.org Vinpro Foundation Wine Project has gone from strength to strength, making eight social workers available to wine farming communities in 14 areas.

These and other milestones are highlighted in the Vinpro Annual Report.

Vinpro chairman Anton Smuts described the organisation as a “crucial partner” for its members and encouraged them to establish and strengthen their relationship with Vinpro. “Use us to become a smarter, more agile and stronger player,” he said.

The following Vinpro regional board members were up for re-election according to the organisation’s three year rotation structure, and were confirmed as re-elected during the AGM:
Anton Smuts – Robertson region and Vinpro chairman
Petrus Bosman – Paarl region
Albert Brink – Northern Cape region

Sharon February, Mutle Mogase, Phillip Retief (vice-chairman) and Rydal Jeftha were also re-appointed as specialist board members for another one year term.

As part of the South African wine industry’s 364th birthday celebrations next year, under the campaign SA WINE HARVEST... END_OF_DOCUMENT_TOKEN_TO_BE_REPLACED

The Consumer Goods and Services Ombud (CGSO) has recently conducted market research, after which several wineries have been identified... END_OF_DOCUMENT_TOKEN_TO_BE_REPLACED
Go Back