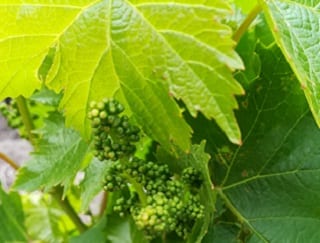 Breedekloof Chenin Blanc in prebloom waiting to develop into a grape bunch.

The South African wine industry is bracing itself for what might be the smallest harvest in more than a decade.

According to a survey by the industry body Sawis (SA Wine Industry Information & Systems) in the last week of November, wineries and viticulturists are predicting a much smaller 2018 crop compared to 2017 – and possibly the smallest since 2005.

Drought, a shrinking area under vines and frost damage will have the greatest effect on the crop size.

According to Francois Viljoen, consultation service manager for the wine industry organisation VinPro, the drought conditions that have been prevalent in the Western Cape for the third consecutive season will have a major effect on the 2018 harvest. “Most of the industry’s large irrigation dams are 30% to 40% full. This means that wine grape producers’ water resources were cut by 40% to 60% and they could not fully meet their vines’ water demand,” he says.

The Olifants River region is especially expected to experience a substantial decline in yield, as producers in this region were allocated less than 25% of their usual water quota from the Clanwilliam dam in the course of the season. The Orange River region is currently the only wine region not experiencing water shortages.

Finally, widespread frost damage at the end of September and start of October will result in large crop losses in certain areas in the Orange River, Breedekloof, Worcester and Robertson wine regions.

“Despite the fact that the 2018 harvest might be much smaller, vineyards are in a very good condition due to frequent rainfall in October and November, as well as cooler weather up to the end of November,” says Viljoen. Vineyard growth is generally good and there have been no noteworthy occurrences of fungal diseases or pests thusfar.

“The low dam levels and insufficient water resources are most likely to have the greatest determinant of a smaller 2018 harvest. Good, regular showers in December and January may of course bring great relief and change the outlook for the better,” says Viljoen.

“Seasonal employment opportunities will be cut significantly due to the smaller harvest, which will have a negative effect on the socio-economic prosperity of wine industry communities. The Olifants River region will most likely be affected worst by this,” says VinPro managing director, Rico Basson.

However, South Africa is not the only wine producing country expecting a smaller harvest. The yields of France, Italy, Spain and California were also under pressure from natural phenomena and this, combined with a greater demand, is set to lead to a wine shortage in specific categories worldwide. “Although wine shelves won’t suddenly be empty, the relative wine shortage creates an excellent opportunity for the industry to compete at higher price points,” Basson says.

As part of the South African wine industry’s 364th birthday celebrations next year, under the campaign SA WINE HARVEST... END_OF_DOCUMENT_TOKEN_TO_BE_REPLACED

The Consumer Goods and Services Ombud (CGSO) has recently conducted market research, after which several wineries have been identified... END_OF_DOCUMENT_TOKEN_TO_BE_REPLACED
Go Back