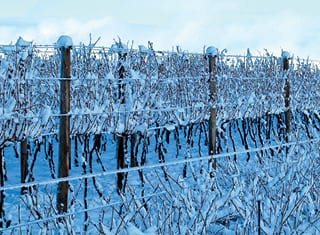 Heroic viticulture is being increasingly recognised in countries such as Spain, Portugal and Argentina and effectively used to sell good wines from extreme vineyards at higher price points.

Planting and managing vineyards on extreme sites is nothing new, but the concept might seem foreign to some. Heroic viticulture, a phrase that evokes romantic images of rugged vineyard workers harvesting grapes on impossibly steep mountain slopes, refers to the conditions of terrains that make cultivating vineyards so difficult.

The Centre for Research, Environmental Sustainability and Advancement of Mountain Viticulture (Cervim), an OIV initiative, is an international organisation that specifically promotes and protects heroic viticulture. Its criteria that define this type of viticulture are specific: Vineyards must be sited at altitudes of at least 500 m and vines must be planted on terraces or embankments at gradients greater than 30% or small islands in difficult growing conditions.

Based on these criteria about seven percent of Europe’s vineyards qualify for heroic viticulture, with more than half of these extreme vineyards found in Switzerland and Portugal. Numerous European countries and their neighbours to the east practise heroic viticulture, including Italy, Portugal, Spain, the Principality of Andorra, France, Switzerland, Germany, Luxembourg, Austria, Slovenia, Croatia, Greece, Cyprus, Lebanon, Armenia, Georgia and Kazakhstan.

The increased risk of frost, hail and wind, and higher production costs are realities of heroic viticulture, but European consumer and producer surveys show the wine from these extreme vineyards are sold at higher price points, making this type of viticulture attractive to the producer.

Making a good wine and attaching its origin and regionality to the marketing tale is an ingenious move, especially if the origin happens to be extreme sites. Super Single Vineyards owner and winemaker Daniel de Waal says they, like many Argentine producers, are trying to foster consumers’ relationship with the terroir instead of the varietal – and it’s paying off.

“These producers benefit by using the extreme region itself as a marketing tool and not just the generic varietals the wines are produced from; as the extreme regions carry more USPs. At SSV, we focus on sourcing from single vineyards selected for their terroir and regionality.

“Our vineyards in the Sutherland-Karoo region are planted at an altitude of 1 500 m above sea level, 350 km inland from the coast, with a cool continental climate. The high altitude ensures cool temperatures in summer during day time, not exceeding 32°C and as low as 5°C during the night; high enough to escape the fiercest of hot Karoo days and ensure the vines are covered with snow in winter. The low average temperatures are greatly beneficial. The high light intensity contributes to the ripe, supple tannin structures we achieve. The fruit itself is unique; with berries and bunches half the size of the average fruit from other regions, resulting in great concentration, colour and low yields.

“Fed by fresh water from the melting snow in winter, together with the occasional ‘elusive’ rainfall, the vineyards are blessed with ancient, deep scali and clay soils. The incredible depth allow for very deep root penetration, assisting the vines during the dry summer season. Remoteness and the cold winters result in an area completely free of disease. Black frost is our main challenge during spring when the young shoots are at their most vulnerable.”

Groot Constantia viticulturist Floricius Beukes also has first-hand experience of heroic viticulture with extreme vineyard sites on the estate. “Some of our Sauvignon Blanc vines are planted up to 236 m above sea level at a slope of 43.7%. With our lowest vineyard just
40 m above sea level, the increase to 236 m is significant. We also have Pinotage and Merlot on
pretty nasty slopes. The higher-altitude slopes are about 10°C cooler than the vineyards at lower altitudes. The lower temperatures allow a longer ripening period, which yields more concentrated, complex grapes compared with the vines lower down on the farm. Even though the crop is small and farming not necessarily easy, these vineyards produce magical wines.”

Floricius says that planting on extreme sites on the estate was primarily done out of necessity. “Groot Constantia is a relatively small estate, which means we have limited land. We don’t have the luxury of only farming the easy sites. That’s why we planted some Pinotage and Merlot on Glenrosa soils on the very steep north-facing slopes, which are a rare commodity in Constantia.”

Managing these extreme vineyards is no walk in the park. “Soil erosion and wind damage lead to a lower yield,” Floricius says. “And with an average rainfall of more than 1 000 mm a year, you have to be well prepared to minimise damage when it pours in July and August. The vineyards at these altitudes are also more exposed to the southeaster, especially during flowering. This can have a serious effect on our crop. The occasional black southeaster in late spring has done a fair bit of damage to young growth.

“It’s also really difficult and very dangerous to farm on these slopes – we’ve written off a few tractors in the mountain. The cost is a lot higher to farm these vineyards. All vehicles must have 4×4 traction, fuel consumption is not great and the wear and tear on vehicles, tractors and farming implements is high.”

Further inland to the north, the Cederberg is home to vines that are 1 036 metres above sea level. The Cederberg is one of two places in the country where the cold climate is not due to coastal influence, Cederberg Wines owner and winemaker David Nieuwoudt says. The other is the Swartberg.
“A cooler climate means slower grape development. Add to this a virus-free area and you’re talking perfect circumstances. With high altitudes a big difference between day and night temperatures is a given. This leads to an extended ripening period and optimal physiological ripeness, especially with varietals such as Cabernet Sauvignon and Shiraz where we see very solid tannin structure and soft wines.”

If you have a special or even extreme site, you need
to be careful with the use of specific terminology.
“If you have or work with ‘the highest’, ‘the steepest’ or ‘the coolest’ know your facts and competition in the category. Don’t lie about your sites or products – if you do, someone is bound to catch you out and your carefully planned presentation will collapse spectacularly. At Cederberg Wines we focus on the facts and can add isolation, incredible water, being surrounded by a conservation area and the absence of disease to our marketing story.”

European consumer and producer surveys have shown the value and sustainability of heroic viticulture – in other words, consumers perceive good wines from extreme vineyards as being of a higher quality than wines from traditional vineyards and are consequently prepared to fork out more for them.

David says while local producers can benefit from this type of marketing (which is not new in South Africa), there are challenges. “When you look at what is being written about heroic viticulture (see https://www.wineandtravelitaly.com/83-blog-do-you-know-what-heroic-viticulture-is-.html) you could say Wosa, when it was first launched in 1999 and steered by Sue Birch, was ahead of its time. It did not have funding and only a small percentage of the wine industry backed it.

“It will be difficult to create a similar body to Cervim in South Africa, this despite Wosa’s high-quality initial groundwork. We have enough information, but now somebody has to adapt and run with it. Wosa has identified some pretty extreme vineyards, but the information has to be used to promote our vineyards.”

André Morgenthal of the Old Vines Project and formerly Wosa agrees with David. “About 10 to 15 years ago Wosa had the vision to start looking for extreme vineyards in South Africa. The purpose was specifically to promote South African wines that had their origins in extreme and marginal vineyards. By differentiating the wines that came from these marginalised sites and focusing on their quality a higher price point could be achieved.”

As heroic viticulture suggests, the people that manage and tend to extreme vineyards are heroes. But perhaps the SA wine industry also needs more heroes in the form of marketers, producers, viticulturists and researchers who can promote the regionality and ultimately boost the price of wine from extreme sites. Just think what Daniel, Floricius, David and the producers from Cape Point Vineyards, Bonfire Hill Extreme Vineyards and Anthonij Rupert Wines, to name just a few, have achieved by marketing their extreme sites.

As part of the South African wine industry’s 364th birthday celebrations next year, under the campaign SA WINE HARVEST... END_OF_DOCUMENT_TOKEN_TO_BE_REPLACED

The Consumer Goods and Services Ombud (CGSO) has recently conducted market research, after which several wineries have been identified... END_OF_DOCUMENT_TOKEN_TO_BE_REPLACED
Go Back