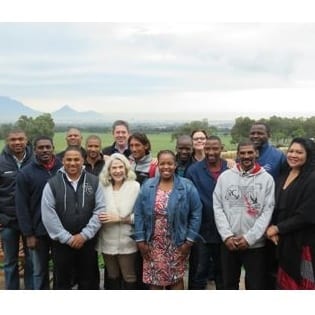 Cellar workers in the South African wine industry have a greater thirst for knowledge than ever before and continuously empower themselves with information about the latest technology and best practices.

South Africa’s top cellar workers recently convened at De Grendel for an educational Circle of Excellence information session. This group consisted of previous winners and finalists of the SA Cellar worker programme which has been offered to the industry since 2009.

This programme aims to empower cellar workers through the transfer of knowledge and technology during a series of annual study groups in the respective wine grape cultivation areas, followed by an evaluation and the awarding of the top cellar worker.

During the information session two senior cellar workers from De Grendel and also members of the Circle of Excellence, Norman Ketelo and Joseph Phiri, led a cellar tour during which two wines were tasted. They shared their insights about this year’s harvest, the winemaking process, as well as challenges they encountered. Elzette du Preez from Shiraz SA joined the discussion by leading a Shiraz wine tasting and giving practical tips about wines, styles and cultivars.

Charles Hopkins, cellar master at De Grendel, informed the group about the different costs within the cellar and everyone attending received an analysis of the average costs per hectare to farm with wine grapes. “Just make sure that your wine, vineyards and brand have a story to tell. This will attract attention and visitors,” said Charles.

The speakers encouraged cellar workers to be curious by asking many questions, and to never stop experimenting with new things.

According to Santi Basson, project manager of the SA Cellar worker programme, every member of the Circle of Excellence is responsible for taking ownership of his or her own future and to be a role model for their fellow cellar workers in the industry. “Challenge yourself and be the best that you can be. Go back to the cellar and share your knowledge with your colleagues,” was her message for participants.

The cellar worker study groups are held from 3 May to 31 August 2016, and the top cellar worker will be announced on 28 October 2016 during an information day.

The SA Cellar worker programme is funded by the VinPro Foundation and the study groups is made possible by Winetech. Nedbank is involved as a sponsor of the Cellar Worker Information day.

As part of the South African wine industry’s 364th birthday celebrations next year, under the campaign SA WINE HARVEST... END_OF_DOCUMENT_TOKEN_TO_BE_REPLACED

The Consumer Goods and Services Ombud (CGSO) has recently conducted market research, after which several wineries have been identified... END_OF_DOCUMENT_TOKEN_TO_BE_REPLACED
Go Back