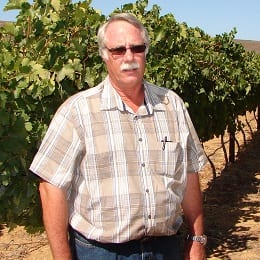 Abé Colyn of the farm Naauwkoes, winner of the VinPro/Winetech Vineyard Block Competition in the Olifants River region.

The precision with which Abé Colyn of the farm Naauwkoes in the Spruitdrift area has farmed a Chenin Blanc block, has earned him the accolade of VinPro/Winetech’s winning vineyard block in the Olifants River region.

The theme of this year’s competition in the region was Chenin Blanc vineyards. “Chenin Blanc is seen as a cornerstone of the region’s wine grape production, as it is one of the cultivars that contribute the most to the area’s total tonnage,” said Gert Engelbrecht, VinPro’s viticulturist for the Olifants River region.

The runners up were Johan Louw of Burgersvlakte in the Spruitdrift area and Johan Fourie of the farm Navada in Koekenaap.

“What was exceptional in Naauwkoes’ winning block was the fact that various aspects such as the vigour, soil and soil water were monitored closely and the vineyard’s fertilising programme and irrigation scheduling were adapted accordingly. An excellent example of precision farming,” said Gert.

Good long-term practices with regard to the trellis system, irrigation system and establishment also contributed to a uniform block, and canopy management was performed very well.

The VinPro/Winetech Vineyard Block Competition is held annually in the respective regions to identify, celebrate and share the best viticultural practices. A Farmer’s Day will be held at a later stage during which the practices of the winning blocks will be demonstrated.

As part of the South African wine industry’s 364th birthday celebrations next year, under the campaign SA WINE HARVEST... END_OF_DOCUMENT_TOKEN_TO_BE_REPLACED

The Consumer Goods and Services Ombud (CGSO) has recently conducted market research, after which several wineries have been identified... END_OF_DOCUMENT_TOKEN_TO_BE_REPLACED
Go Back