Extend your vineyard’s lifetime with these tips 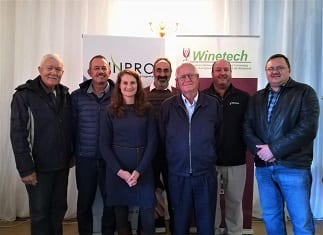 South African wine grape producers can extend the lifetime of their vines through effective water usage, well-planned root management and by eliminating harmful viruses, said presenters at a series of Vinpro Winetech Information Days in May.

The technical days were presented in Robertson, Vredendal, Stellenbosch, Worcester and Paarl from 22 to 29 May, in collaboration with the Institute for Wine and Grape Sciences (IGWS), as well as a Monash SA and Villa Crop partnership.

Where water suitable for agricultural purposes is scarce, it is important to monitor and manage usage meticulously. Israel’s agricultural sector is a good example where precision systems are used to apply irrigation and fertiliser effectively, says Pierre Snyman, Vinpro viticultural consultant. Pierre was part of a Netafim study group that attended the Agritech Israel Conference in May.

“Due to the saline soils that dominates in Israel, producers need to apply approximately 40% more irrigation than normal to push back the brakish salts. Date trees receive up to 800 litres per tree per day to this end,” says Pierre.

Over and above the salinity of their soils, Israel also has very limited supplies of fresh water, which primarily originates from desalinisation plants along the Mediterranean coast.  The water used for irrigation is mainly recycled water prepared for agricultural use in large purification plants outside the cities.

“Up to 70% of all water used for irrigation in Israel is recycled after human use and is recycled three to four times before it is released into the ocean,” says Willem Botha, marketing manager of Netafim. Irrigation is almost exclusively done via drippers, in some cases underground, to limit evaporation. There is also a huge emphasis on precision systems to ensure optimal usage of the available irrigation water.

Buffered root systems might be the most important countermeasure against climate change going forward. Experienced viticulture and soil specialists Prof Eben Archer and Dawid Saayman launched their publication Wingerdwortels, at the information days.

According to these two specialists producers should place a greater emphasis on developing roots, as this has not received the same attention as vineyard practices above the soil. A strong, healthy root system ensures a vineyard more resistant to global warming. It also extends the vine’s lifetime and protects it against underground pests and diseases.

The Wingerdwortels publication offers in-depth insights into local and international research, including the growth, morphology and anatomy of vine roots, the physiology and function thereof, root monitoring methods, the factors affecting root growth and distribution, as well as root maintenance.

Leafroll infection, and especially the reinfection of young vines, has a significant effect on the lifetime of vines and can even affect wine quality.

According to Lucinda Heyns, technology transfer coordinator at the IGWS, trials indicated wines made from grapes originating from leafroll-infected vines typically showed less fullness, and were often described as unbalanced and lower in quality.

“When uprooting old vines, it is important to ensure that as much of the old plant material is removed, especially the roots,” says prof Gerhard Pietersen of Stellenbosch University’s Department of Genetics.

After the producer has planted new vines that are certified as free from leafroll virus, the next step is to protect the young vines from insects that transmit the virus with a systemic pesticide. Any vines that test positive for, or shows symptoms of leafroll virus, should be removed immediately. If not, research has shown that the occurrence of leafroll around these infected vines may double annually, and eventually have an effect on the vine’s lifetime. Vineyard blocks should be inspected annually to keep the infection rate low.

Grapevine mealy bugs and scale insects transmit the virus; therefore vineyard workers should take care not to distribute the virus from infected blocks to younger vines via their clothes or implements. These strategies form part of a leafroll management protocol developed by Winetech, researchers and the IGWS.

Researchers from the Universities of Pretoria and Stellenbosch also work together on an international project, Tropicsafe, which aims to research harmful viruses that are transmitted by insects. It is funded by the European Union and the research includes diseases such as lethal yellowing in palms, aster yellows in grapevines, Huanglongbing in citrus that occur in tropical regions in Africa, the Americas and subtropical areas of Europe.

The research entails identifying infected areas and host plants, as well as collecting possible insect vectors such as leafhoppers. Vinpro has been appointed to manage the vineyard-related technology transfer. Prof Pietersen encourages producers to become involved in the project by making their vineyards available for research.

The Vinpro Winetech regional information days are held annually in May and September to ensure that wine grape producers are kept up to date with the latest research, technology and practices.

As part of the South African wine industry’s 364th birthday celebrations next year, under the campaign SA WINE HARVEST... END_OF_DOCUMENT_TOKEN_TO_BE_REPLACED

The Consumer Goods and Services Ombud (CGSO) has recently conducted market research, after which several wineries have been identified... END_OF_DOCUMENT_TOKEN_TO_BE_REPLACED
Go Back