Challenging season ahead for wine grape farmers in SA 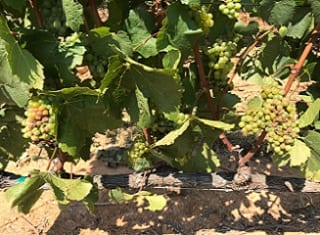 Vineyards in the Western Cape are hit hard by the drought.

The South African wine industry has reached a challenging stage in the harvest season due to the continuing drought and low water supplies in the Western Cape.

According to the industry body Sawis (SA Wine Industry Information & Systems) a second crop estimate of the South African wine grape harvest in the second week of January predicts an even smaller harvest than previous estimates at the end of November 2017 – possibly the smallest since 2005.

Francois Viljoen, consultation service manager for the wine industry organisation Vinpro says the declining trend predicted in the past two months can be mainly attributed to the warm and dry weather conditions that occurred early December. “Virtually no rain fell during this period and many hot days (above 35 °C) were recorded. Together with a persistent south-easterly wind, this increased the water consumption of vineyards.”

Drought conditions have been prevalent in the Western Cape for the third consecutive season with major dam levels currently around 26.6% full compared to 41.6% in 2017. Most producers depend on irrigation water from the various irrigation schemes that have been rationed since early in the 2017 growing season. Water quotas have been cut between 50-80%.

“This available water is simply not enough to meet the needs of the vineyards at this stage,” says Viljoen. “Vineyards are now beginning to show symptoms of water shortage and declining berry growth. Smaller berries mean a lighter harvest with lower juice levels which contribute to lower volumes.”

The lack of rain, shrinking water supplies and continual hot days can further lead to a smaller 2018 crop.

“This challenging season does have a negative impact on producers’ income potential, but lower stock levels and smaller international crop yields now also provide the opportunity to give momentum to a structural income adjustment,” says managing director of Vinpro, Rico Basson. “Businesses now have to focus on the appropriate packaging of what they have to offer when discussing price points. Opportunities created by the drought crisis must be fully exploited to benefit the producer in the long term.”

The Olifants River region is affected worst by the drought and producers in this region were allocated less than 17% of their usual water quota from the Clanwilliam dam (now only 19.9% full) in the course of the season. The Orange River region is currently the only wine region not experiencing water shortages.

As an important provider of permanent and seasonal work in the agricultural industry, the drought will have an impact on especially seasonal workers as the harvest period will shorten due to the smaller crop. This could lead to further unemployment and will have a negative impact on the social welfare in the different communities.

“Timely action and cooperation between local governments and other private initiatives are an unquestionable reality,” said Basson. Although resources may be limited, efforts must be made to be proactive in the respective regions and between interest groups in order to deal with this situation optimally.”

“This is a difficult time for agriculture, with the sector being hit hard by persistent drought,” says Western Cape Minister of Economic Opportunities, Alan Winde. “To date, the Department of Agriculture has invested R67 million in drought relief to support farmers to keep their businesses running.

“In the wine sector, which has not come away unscathed, reduced rain has however meant an improvement in the quality of our produce, giving us a clear competitive edge in international markets.”

As part of the South African wine industry’s 364th birthday celebrations next year, under the campaign SA WINE HARVEST... END_OF_DOCUMENT_TOKEN_TO_BE_REPLACED

The Consumer Goods and Services Ombud (CGSO) has recently conducted market research, after which several wineries have been identified... END_OF_DOCUMENT_TOKEN_TO_BE_REPLACED
Go Back