A bridge (not) too far

Canada and the USA are two of the biggest countries in the world, so it’s no wonder they’re attractive export markets for Brand SA. 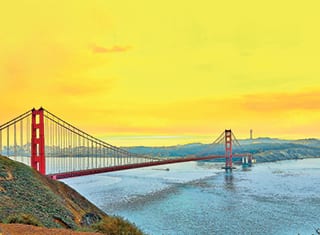 Trade legislation, particularly where the Land of the Maple Leaf is concerned, may however act as a deterrent, but with proper marketing and working through the right channels producers can get their wines onto the shelves in these two countries.

It’s no secret Canadians and Americans love wine. “Canada is one of the world’s top consumers of wine by volume, with 80% of Canadians consuming alcohol,” says Wines of South Africa (Wosa) marketing manager for Canada, Laurel Keenan. They’re a thirsty bunch, the Canadians, considering their total consumption of 33 million cases of imported wine a year.

America, on the other hand, has shown solid growth with packaged wine growing by 9% and Blanc de Noir by a whopping 32% for the period July 2016 – June 2017 compared with July 2015 – June 2016 (Sawis). The USA is important – an outcome of the South African wine and brandy industry’s Wine Industry Strategic Exercise (Wise) project focuses on the growth of specific export markets, one being America.

Those exporting wine to America will be familiar with the three-tier system, but to the uninitiated it may seem daunting. Basically this system controls the flow of wine (no pun intended) from producers to wholesalers to retailers and finally to consumers.

The Canadian government on the other hand controls the liquor trade in its provinces through various liquor control boards. Each province, except Alberta, has its own board and models.

A good relationship with the relevant liquor control board is key to understanding the market and fragmented trade mechanisms.

The right place, the right time

Hamilton Russell Vineyards owner Anthony Hamilton Russell is familiar with the ins and outs of exporting wine to Canada. “For certain types of producers generally trading at lower price points, Canada could be seen as a more attractive prospect than America. Despite varying degrees of state control, with state liquor monopolies you have a kind of on-and-off switch for large amounts of wine if the price and category are right – in other words, instant trade push instead of a slow, arduous building of consumer demand or one negotiation with a few individuals instead of the slow building of multiple relationships.

“For a producer such as Hamilton Russell Vineyards we feel we have a kind of gatekeeper between us and the consumer demand we have built up slowly over more than 20 years. If the gate is opened our allocation sells out very quickly. If not, there’s no sale.

“We continue to allocate wine for the Canadian market for several reasons. Canada is an affluent country and with the exception of parts of Quebec, it’s English-speaking, making communication easy. Canadians also travel to SA more and more regularly and to date we’ve had good reviews and sales. We don’t believe we can build a global brand without being there – even if it’s only in a small way. Besides which, we really like Canadians!”

Anthony says that entering the market early and marketing to the right people played a breakthrough role in America and Canada. “In the US we were among the first to move into the market after sanctions were lifted and we got things right from there on. We’ve been building the market for 25 years. A big part of getting things right was choosing the right importer and distributor and pricing our wine correctly. Our multiple Wine Spectator Top 100 placements have also helped. For Canada our biggest breakthrough has probably been the choice of our agent and personal meetings with key buyers at the state monopolies.”

We should market Brand SA

Marketing remains a crucial factor for success anywhere in the world and the recent launch of the Wine of Origin Cape Town wine region is a big step forward for Brand SA, says André Shearer of Cape Classics. “There’s a great deal of focus on our wine and its quality, but much more focus should be put on Brand SA. The new Wine of Origin Cape Town region is a fantastic concept and a step in the right direction. The marketability of Cape Town is huge as it’s recognised globally. We need to work together and market this great brand instead of being discouraged by a diluted version of Brand SA due to low budgets, poor or no collaboration, a lack in national strategy and an inept government.”

Maia Vosloo of MAN Vintners (marketing and sales in Western Europe, Scandinavia, UK, USA and Quebec) says a marketing survey in America and Canada showed Canadian consumers didn’t see South Africa as a winemaking country. The survey also confirmed Brand SA is much stronger in America than in Canada. For this reason only a small amount of MAN Vintners’ wine is sold in Ontario and Quebec, with the main focus remaining on America, which is also its main export market.

But Uncle Sam can be a difficult customer. “The US is set in its ways and there are systems in place that can’t be negotiated,” says Ken Forrester, CEO of Ken Forrester Wines. “So fit in or … This road is paved with failures! The US is possibly the most oversupplied market in the world, the residents are disinterested in the complexities of South Africa and the diplomatic ties between the two countries are weak. In short, in my opinion it’s not necessarily the next go-to market for SA. It’s a market that requires considerable investment in terms of time, careful positioning and plenty of marketing dollars. It’s probably the most complex and competitive market in the world.”

Ayama co-owner Michela Dalpiaz confirms that the right kind of marketing will increasingly open doors for Brand SA in America. “The demand is not there yet for South African wine to be a popular everyday wine, but an increase in marketing actions done by Wosa and a few small but specialised importers is building a different perception of and curiosity about great Chenins and Pinotages as alternatives to the usual Sauvignon Blancs or French reds.”

Michela highlights one of the challenges marketers of SA wine in America face. “One of the issues is variety. SA wines are mostly of French origin, with only Chenin Blanc and Pinotage known as local wines. Producers and importers should promote these varieties first and foremost as single varieties or as main components in blends to create a local SA grape brand. We also need to push diversity, not only for soils and microclimate, but winemaking styles. We have so many amazing experienced older and new-generation winemakers who’ve travelled widely and had winemaking experiences in various countries. American consumers love talking to producers – we need to be on the road more and involved in events, dinners and exhibitions.”

Questions any good wine marketer will ask as part of preparing a marketing strategy are: “How are SA wines perceived in the USA and Canada?” and “It’s often said our wines are popular there, but why?”

“I think there are two fundamental things that have always contributed to South African wines’ attraction for Americans and Canadians alike,” Anthony says. “Firstly, they have – or are perceived to have – a slightly more restrained, origin-expressive and classical leaning than much of what is offered from the New World. Secondly – and this is a very important point for South African producers – top-end South African wine offers extraordinary value, perhaps more so than any other major wine-producing country. This attraction is increasingly more widely perceived and publicised. The average American wine scoring 90 and above in Wine Spectator sells for about $100 a bottle compared with $50 a bottle for the SA equivalent. Americans are far less interested in the cheaper, higher-volume South African wines and the competition at this end of the market is intense and comes from several countries well equipped to deliver value at low prices.

“Canada remains hard to penetrate, more significantly because its system rewards producers with higher volumes at many price levels. Our wines that are most attractive to them are made in small, almost insignificant volumes. South Africa has very, very few top-end wines with any meaningful volume behind them.”

Savvy marketing should be an overarching concern and consumer trends should be carefully observed and implemented in marketing plans, Anthony says. “There’s an ongoing worldwide consumer trend towards wines showing more restraint and classicism, wines with more of a sense of place than simply a dramatic varietal expression. This plays to the strengths of top-end South African wine. The more sophisticated consumers become, the more attractive our best wines are to them.”

When shopping for wine consumers consciously or unconsciously ask why a wine from South Africa and not Chile, France, Australia, New Zealand, Germany, Italy, Spain or any one of the many other wine-producing countries of the world should end up in their glass. It’s up to all of us to make that choice easier.

As part of the South African wine industry’s 364th birthday celebrations next year, under the campaign SA WINE HARVEST... END_OF_DOCUMENT_TOKEN_TO_BE_REPLACED

The Consumer Goods and Services Ombud (CGSO) has recently conducted market research, after which several wineries have been identified... END_OF_DOCUMENT_TOKEN_TO_BE_REPLACED
Go Back