An insider’s guide to the NORTHERN CAPE 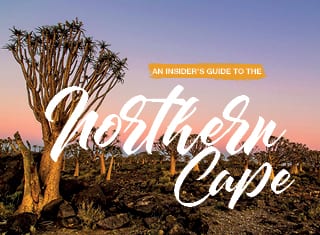 With hot summer days, chilly nights and very little rainfall, the Green Kalahari is not exactly traditional wine country, is it? Situated about 800 km from Cape Town, Johannesburg and Pretoria, this region is the gateway to the Kalahari and the rest of Africa. In this arid landscape, the Great Gariep, or Orange River as it’s more commonly known, is the region’s lifeblood and makes viticulture possible. At least 10% of South Africa’s vineyards – more than 23 million vines – are to be found here. The Northern Cape officially includes the Douglas and Sutherland-Karoo wine-producing districts, and Central Orange River, Hartswater and Prieska wards.

The Kokerboom Food and Wine Route, named after the quiver trees that dot the landscape, runs through Kanoneiland, Kenhardt, Keimoes, Friersdale, Kakamas, Marchandt, Augrabies, Riemvasmaak and the Augrabies Falls National Park. Along the way you can immerse yourself in local culture, from the Nama culture and cuisine at Riemvasmaak with its hot springs and granite canyon to that of the San, Africa’s oldest human inhabitants. For more info on planning your trip go to kokerboomroute.co.za.

Orange River Cellars is a familiar establishment in the Northern Cape. Established in 1965, it now has tasting rooms at Kakamas, Keimoes, Grootdrink, Groblershoop and Upington, home to the main tasting room. For years, Orange River Cellars has been known for its Colombard, a perennial favourite among both locals and tourists, but the wide range of wine varies from dry table whites and reds to natural sweet, semisweet, sparkling, fortified and even a straw wine. The producer is famed for its muscadel and the White Muscadel 2016 boasts five stars in the 2018 Platter’s.

They offer wine and brandy tastings or you can treat yourself to breakfast or lunch at the Bezalel Garden Café & Brewhouse. The pure VSOP Alembic brandy is a pot-stilled brandy made from their own grapes. Lauren’s Kitchen sells rusks, biscuits and preserves – the raisin jam and balsamic marmalade are firm favourites. Picnics can be pre-booked. They also offer accommodation in a restored 1930s Cape Dutch-style farmhouse.

Prieska was registered as a wine-producing ward in 2015. The winemaking team at Lowerland pride themselves on using natural farming methods and have kudus that help prune the vineyards, while bat-eared foxes and owls keep pests under control. Pecan shells and bronsmara manure are used to fertilise the vines. They specialise in traditional winemaking techniques such as natural fermentation, basket pressing and manual pumpovers. The wines, produced from organically certified vineyards, include Witgat Viognier, Herd Sire Reserve and Tolbos Tannat. Pecan nut trees, meat, non-hybridised wheat, ancient grains and non-GM maize are also grown on Lowerland.

The mighty Orange River is the perfect setting for all kinds of adventure sports, from river rafting to kayaking. In October athletes descend on the area for the annual Kalahari Augrabies Extreme Marathon that stretches over a gruelling 250 km.

A visit to Augrabies, derived from the Khoi word meaning “the place of great noise”, to view the sixth largest waterfall in the world is certainly worth the effort. The Augrabies Falls National Park is a hiker’s paradise and if you’re into game viewing you’re likely to see buck such as gemsbok and klipspringers. Augrabies Hot Air Ballooning offers you the unique opportunity to view the mighty falls from the air.

A more relaxed way to enjoy the Orange River is to take a sunset cruise on Sakkie se Arkie. Day visitors can enjoy water sports, camping and a cruise on the River Taxi or the Arkie.

Kalahari Adventures is based at the Augrabies village and offers adventure trips such as river safaris, white-water rafting, birdwatching and fly-fishing expeditions, and drives into Riemvasmaak, Bushmanland and Kgalagadi Transfrontier Park.

The Koms Quiver Tree Nursery, located on the R359 between Neilersdrif and Kakamas, sells quiver trees at all stages of development, from seedlings to seven-ear-old trees of over a metre tall. The branches of the trees were used by the Bushmen as quivers for their arrows, hence their name.

The Kalahari-Oranje Museum in Upington is housed in what used to be a mission station. The displays include Hennie Potgieter’s life-size sculpture of a donkey to commemorate these animals’ contribution to the development of the Lower Orange River Valley. While you’re there, visit Calabash in Grootdrink for some original mementoes to decorate your home.

For more info go to:

As part of the South African wine industry’s 364th birthday celebrations next year, under the campaign SA WINE HARVEST... END_OF_DOCUMENT_TOKEN_TO_BE_REPLACED

The Consumer Goods and Services Ombud (CGSO) has recently conducted market research, after which several wineries have been identified... END_OF_DOCUMENT_TOKEN_TO_BE_REPLACED
Go Back